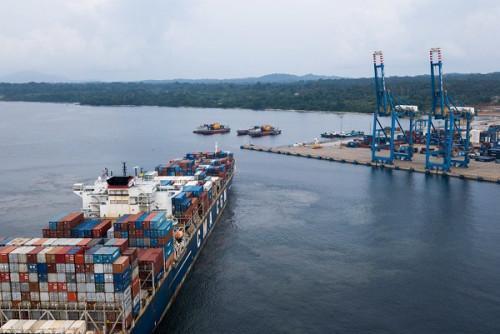 (Business in Cameroon) - Asia receives 87% of exports traffic on the deep seaport of Kribi, in South Cameroon, according to statistics recently published by the Autonomous Port of Kribi (PAK), the public company that manages the port platform operational since March 2018.

Moreover, the PAK points out, the bulk of this exports traffic, consisting mainly of logs and sawn timber (99% of goods loaded for export), is directed towards China. Next follows Germany, Belgium, Congo, and France. “In Europe, the exported products are cocoa derivatives, i.e. butter, cake and beans,” the PAK stresses.

According to NGOs, the concentration of most timber exports towards China (an activity carried out by Cameroonian, Chadian, Congolese (DRC) and Central African operators) can be explained by the entry into force of the Flegt agreements in the European Union (EU). These agreements are reputed to be more rigorous in terms of forest exploitation and the traceability of wood sold on the European market.

To avoid the rigidity of the agreements, several African operators are turning away from the EU, which was their original market, to redirect their exports to China, reputed to be more flexible, the environmental NGOs explain.

In addition to exports, China largely dominates imports traffic at the Kribi port platform. “China is the first importer at the port of Kribi. Most of the products of Asian origin are building materials, electrical machinery and appliances, followed by food products,” official sources indicate.

This preponderance of Chinese imports, mainly dominated by construction materials and equipment, is explained by the number of infrastructure projects that Chinese companies, such as Sinohydro (dams, roads, buildings, etc.) or CHEC, are carrying out in Cameroon and even in the Central African sub-region.

CHEC, for instance, built the deep seaport of Kribi and is currently completing the highway that serves this infrastructure. The Chinese company is also laying the starting blocks for the 2nd construction phase that will provide the Port of Kribi with a 2nd container terminal, twice as long as the first (350 m).