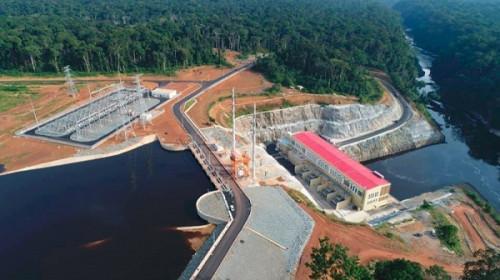 (Business in Cameroon) - On April 16, 2019, following a series of tests carried out three days earlier, the Cameroonian energy minister, Gaston Eloundou Essomba, finally powered up the Memve’élé dam whose commissioning was expected since 2017.

The Dam thus produced its first 80 MW for the interconnected grid in the South region. Initially scheduled for 2018, then for Q1 2019, the power up procedure carried out from the city of Mbalmayo finally happened on April 16. The Mbalmayo-Yaoundé transmission line is yet to be constructed.

In full production, the facility is expected to add 211 MW to Cameroon’s power production capacity in response to poor electricity supply facing the country ; what is not yet the case due to delay in the construction of a 300-km transmission line from Nyabizan (where the dam is located) to Yaoundé.

The XAF450 billion facility is presented by the World Bank as one of the Cameroonian projects whose investment is six times higher than that of similar projects in countries with same development level as Cameroon.