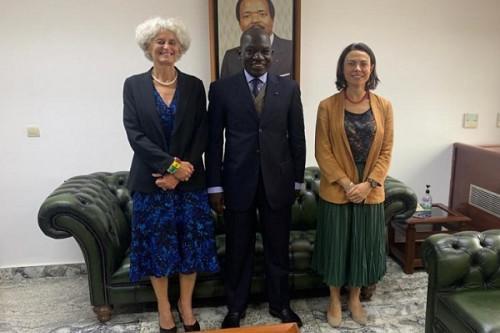 É(Business in Cameroon) - lectricité de France (EDF), the company piloting the Kikot dam project on the Sanaga River, is counting on the World Bank to raise the financial resources necessary for its completion. The idea was discussed last September 27 in Yaoundé between Alamine Ousmane Mey, the Cameroonian Minister of Economy, Valérie Levkov, EDF Director for Africa, Middle East and Eastern Mediterranean, and Marlene Biessy, the Head of EDF Cameroon.

“The Ministry of Economy agreed to work with the EDF teams to get the attention of the World Bank Group, and more specifically the International Finance Corporation (IFC), on the project and mobilize the financing,” a statement of the Economy Department revealed. As a reminder, IFC is already participating in the Nachtigal hydroelectric project, in which EDF is the reference shareholder of the project company (Nachtigal Hydro Power Company-NHPC) with 40% of the capital while the fund provider controls 20% of the capital. IFC has committed to injecting €217 million (more than CFA142 billion) into this infrastructure (in equity and loans). The amount represents more than 18% of the overall project value. Nachtigal project includes the construction of a 420 MW hydroelectric power plant and is scheduled for delivery in 2024

Under the Kikot dam project, which is expected to produce between 450 and 550 MW, EDF signed exclusivity and development agreements with the Cameroonian government on November 26, 2019, and June 21, 2021, respectively. "We are going to start searching for financing by the end of the year,” Valerie Levkov said last February after a meeting with the Minister of Finance, Louis Paul Motaze. The current schedule provides that the financial closing be completed by 2024 at the latest so that construction work can begin in early 2025 and the hydroelectric plant commissioned in 2029.

Several prerequisites must however be met before work starts. The project company must first be created and all project contracts (power purchase agreement, power sales license, concession agreement, connection agreement, and distribution agreement) must be signed. "Studies related to the connection of the project to the national grid (connection solution, substation studies, and layout of the evacuation power lines) are underway, in close consultation with Sonatrel (the public company in charge of electricity transmission)," EDF states in the latest project newsletter dated September 5, 2022.

However, in all five newsletters produced so far, the French company has not mentioned the power purchase agreement, which is often a key element in the mobilization of financing. Cameroon’s power utility Eneo said it is too early to discuss it since the sizing studies for the project are still underway (definition of the works, infrastructure, necessary ancillaries, organization of the site, etc.). The preliminary design is expected at the end of the year.

It should also be noted that the schedule is very likely not to be met since the Minister of the Economy now wants the Kikot dam to be "a real development pole, with upstream intensive aquaculture development and downstream agribusinesses, leveraging the irrigation opportunities offered by the dam".  Alamine Ousmane Mey also indicated in the minutes of the hearing held on September 27 that there is an “opportunity to create conditions for the development of tourism in this project (located 65 km from Yaoundé), particularly through the development of parks.”

As for EDF officials, they have "noted the need to begin preparing the asphalting of the access road to the project site, as well as the development of the road network, to open up the area of the dam”.

Written by Aboudi Ottou and S.A.