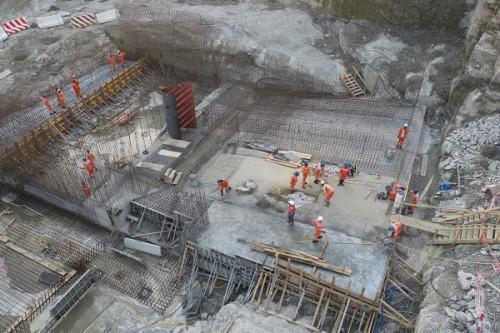 (Business in Cameroon) - On February 3rd, 2021, the Nachtigal hydroelectric dam construction site was disrupted by a gigantic protest movement.

The reason was an attendance machine error that led to inaccuracies in workers payment. They blocked works at the site taking that opportunity to list other demands and describe the already growing frustration among workers.

"Workers feel that the main company and its subcontractors are not respecting contracts. There are many problems like the poor quality of the foods, work pressures, poor team management, wage disparities, etc. The last straw that broke the camel’s back is the bug in the attendance machine. Instead of also considering the manual attendance records, they just validated the salaries of XAF3,000 and X AF5,000 for others. Hence our protest," a source close to the case explained.

According to a note published by the project director Christophe Denat, calm was restored after a meeting held the same day (February 3rd) between worker representatives, the departmental labor delegation and the management of Société camerounaise de construction du barrage de Nachtigal (CCN), which is in charge of the constructions.

"A more coherent and fairer salary calculation method will be effective from February 2021 payroll, in accordance with the minutes of the meeting of January 25, 2021. Management promises to ensure that this method will not reductions in any worker’s salaries," Christophe Denat says.

According to him, an evaluation campaign is underway. It may lead to a workers’ category reclassification based on the competency assessment criteria. This reclassification will also be effective as from February 2021 payroll. Finally, a performance bonus will be effective starting from the March 2021 pay.

Construction deadlines to probably be affected

The Nachtigal dam development project was launched to ultimately reduce the cost of electricity and make electricity a  sustainable resource for the population and industries in Cameroon. Scheduled to be commissioned in 2023, this 420-MW hydroelectric power station, located on the Sanaga River, will increase the country's electricity supply by nearly a third.

However, the infrastructure may not be delivered on time if the protest movements get regular. As of October 2020, the works were 30% completed and because of the coronavirus pandemic, they were suspended. Nachtigal Hydro Power Company (NHPC), the concessionaire of this infrastructure, even notified ENEO (the only electricity distributor in Cameroon) that has a supply contract with it about a case of force majeure.