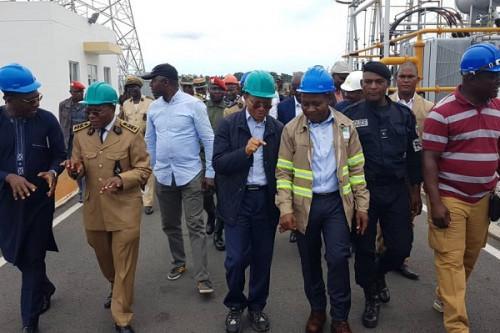 (Business in Cameroon) - In Late June 2021, during a special plenary session of the national assembly, Minister of Water and Energy (MINEE) Gaston Eloundou Essomba provided an update on the 225 kV Memve’ele hydropower plant project.

During his address, the official explained that only 5 kilometers of the 270 km Nyabizan-Yaoundé electricity transport line were yet to be built. So, the line will be completed by September 2021, after several failed deadlines, the MINEE added.

“The Memve’ele hydroelectric plant is already injecting 90MW of energy into the South Interconnected Network [ed. note: in the best of cases]. Once the 225 Kv line is completed, by September 2021, the volume of production injected will rise to 211 MW,” he said. Yet, according to the company in charge of the construction, because of the flow of the Ntem River, the plant will not operate at full throttle after the completion of the transport line.  The company’s experts believe that the said flow will not be sufficient to regularly drive the four turbines, whose capacity is 52.75 MW each. The solution they suggest is the construction of a reservoir and the project is currently being fine-tuned.

Overall, once the transport line is completed, the State of Cameroon will start saving substantial costs. Indeed, two years ago, the MINEE indicated that from April 2019, when the Memve’ele plant was commissioned, to September 2020, close to XAF27.641 billion revenues were generated. Those revenues were fuel costs saved due to the suspension of operations at the Ahala, Oyom Abang, and Mbalmayo thermal power plants as well as the water rights the government generated from this dam through EDC.

For the construction of this plant, the government secured a XAF243 billion loan from China Eximbank. In April 2012, the company selected for the construction, Sinohydro Corporation Limited, was allowed to complete the works within a 54-month deadline. On June 15, 2012, the construction work was launched by President Paul Biya and the plant was expected to be commissioned in 2016. However, the project was delayed due to financial blockades and compensation problems.

The project’s estimated cost was XAF420 billion. Cameroon is to provide XAF65 billion while the AfDB is to contribute XAF112 billion to complement the XAF243 billion loan agreement secured from China Eximbank. But for the World Bank, the real cost of the project is XAF450 billion. The Bretton Woods institution even commented that the costs were two to six times more expensive than similar infrastructures in countries with the same development level as Cameroon.