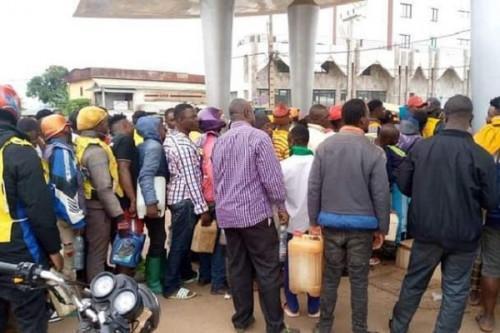 (Business in Cameroon) - Cameroon has been facing fuel shortages over the past few days. This situation is due, according to the Minister of Water and Energy, to the fact that subsidies for fuel supply have not been mobilized in time.

“Fuel subsidies have peaked at CFA80 billion for June alone. For the first half of the year, they are estimated at CFA317 billion. A sum that the government is struggling to raise,” Gaston Eloundou Essomba said in a July 11 statement. To tackle the issue, the President of the Republic has instructed the mobilization of "adequate" financial resources to ensure the continued subsidy payment. This decision has led, since July 11, to the unloading of large volumes of already available petroleum products; 28,000 m3 of super, 22,000 m3 of diesel, and 12,500 m3 of Jet A1 are being unloaded and gradually released for consumption, Gaston Eloundou Essomba informed. Additional volumes of 88,000 m3 of diesel and 35,000 m3 of super are also available and will be unloaded in the coming days.

The fuel shortage somehow started last April in Yaoundé before spreading to other cities in the country. At that time, the government said it was due to disruptions in the international market caused by the Russian-Ukrainian conflict.