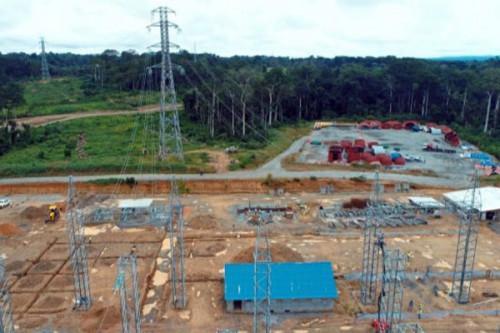 (Business in Cameroon) - Nachtigal Hydro-Power Company (NHPC), the company in charge of the Nachtigal hydroelectric project (420 MW), informs that the transmission line component of the project is now completed, sooner than expected.

Led by the French company Bouygues Energies & Services, this component whose overall cost is estimated at €16.5 million (XAF10.8 billion) was launched on February 1, 2019, and completed within 31 months.

In the framework of that component, three transmission lines were built. According to the NHPC, the first line (Nachtigal - Yaoundé, 51 km long) is a 225kV line. It  "will be used to transport the energy produced by the Nachtigal power plant to the Nyom2 substation in Yaoundé for injection into the Southern Interconnected Network (...) it is a set of 2 transmission lines supported by the same towers, each cable being a two-core 570 mm² conductor.”

Completed on September 30, 2021, the second line is also a 225kV (over 800 m long) line. It will transport the electricity generated from the power plant to the busbar at the Nachtigal substation, where the two lines to Nyom2 station start.

The third line is a 2.2 km long 30 kV feeder that will serve local communities.  It will improve the electricity supply for the population close to the project area. Completed on September 30, 2021, the line will transport electricity generated by the small 4.5MW power plant to be installed at the foot of the dam.

The overall Nachtigal hydroelectric project is currently 40% completed. The result of a XAF786 billion investment, the energy infrastructure which will inject its first megawatt into the Cameroonian electric grid in 2023 will boost the country’s overall electricity generation capacity by one-third.