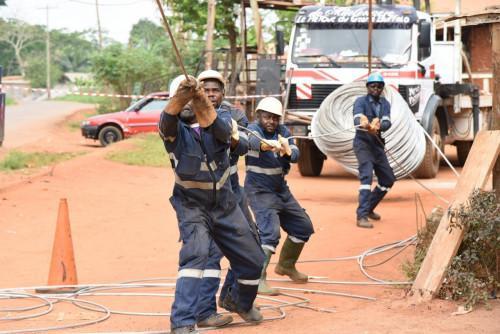 (Business in Cameroon) - Power cuts have recently become recurrent, at daytime, in many districts of Yaoundé, the Cameroonian capital. This is the consequence of reinforcement works currently being carried out on the electricity distribution grid by power utility Eneo in Yaoundé. Launched early February 2019, works are scheduled to last 5 months.

“Works cover electrical and mechanical reinforcements. The first involves replacing cables of small cross-section (34 mm²) with cables of large cross-section (148 mm²), to increase transit capacities. For the mechanical reinforcement, it is a matter of replacing wooden posts with concrete posts. All these works have a single objective : to improve service quality,” explains Jean Jacques Gwet, the project manager.

With demographic growth, distribution networks of many districts in the capital, last rehabilitated in the 1990s, have become saturated leading to overheating of cables and energy losses, implying a drop in household voltage.

Eneo believes the situation will be addressed once works are completed. The new cables will not only have much greater transit capacities, but will also allow, according to the project manager, a more flexible operation of the network, with in particular the possibility of switching from one line to another if necessary.

These works, which involve a 95 km overhead and underground line, will cost about XAF1.8 billion, the company said. The program is also underway in Douala, the economic capital.

In the long term, Eneo wants to strengthen 170 km of lines in the two cities. Let’s note that this measure is part of first phase of Eneo's investment program for 2019, which has a budget of XAF47.3 billion approved by the Board of Directors.