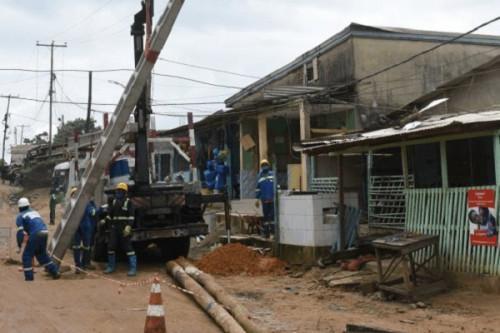 (Business in Cameroon) - Cameroon power utility Eneo claimed it invested a total of CFA53 billion in 2021, double the amount spent annually over the past five years.

In 2020, when Covid-19 was hitting hard and activity was low, Eneo's investments amounted to CFA28.1 billion, the company's annual report showed, underscoring that 2021 saw the largest actual financing of investments over the five years under review. "Eneo made a lot of progress in 2021 by improving the distribution network, access to electricity, and upgrading meters with prepaid meters. Significant progress has also been observed at the production development sites," the 2021 report read.

Most of the investment over the year went to working to extend the life of the Songloulou and Edéa dams, the launch of the Maroua and Guider solar power plant construction project, civil engineering work to house 30 MW of modular solar power plants by the Scatec company in the northern part of the country, the deployment of new generators in isolated power plants, etc. The power company reported it has also invested funds to upgrade billing and electricity access tools through the installation of 223,000 prepaid meters in 2021 alone, bringing the total number of this type of meter in Cameroon to 290,000; 95,234 new connections have also been completed.

Support from bankers and the government

According to the local subsidiary of British investment fund Actis, which has not yet succeeded in ending load shedding in Cameroon despite its various investments, bankers and the government granted firm support in 2021.  "The CFA100 billion raised from local banks has essentially helped boost our investments," Eneo said, recalling it successfully closed, on December 31, 2020, a loan of CFA100 billion from a pool of eight local banks led by Citibank.

This fundraising operation was authorized by the Board of Directors in January 2020 on the condition that the company improves its creditworthiness. Indeed, Eneo was facing tough cash flow pressures consecutive to the non-payment of bills by its largest consumers, including the State and its bodies. The payment of CFA45 billion in bill debt by the government in June 2020 changed the local capital market’s view on the company, allowing it to get the loan. Plus, the government announced the payment of an additional CFA30 billion right after the first disbursement. “Thanks to the CFA45 billion and the regular bill payment by the government over the first five months of the year (2020), negotiations on the CFA100 billion loan have been resurrected," explained Eric Mansuy, then CEO of Eneo.