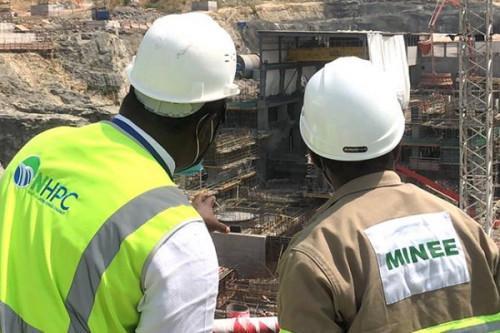 (Business in Cameroon) - The Nachtigal hydroelectric project (420 MW) was 51.7% completed as of end-November 2021. The estimate was presented by the Minister of Water and Energy Gaston Eloundou Essomba during a visit to that site located 65 km from Yaoundé, on December 20, 2021.

“We are glad the lot that includes energy transport to Yaoundé is already completed. As of end-November 2021, the completion rates were as follows: 52% for the civil engineering lot, 48.2% for the first electromechanical lot, 99.8% for the transmission line lot, 88.6% for the ‘staff housing estate’ lot,” the official said.

According to the Minister of Water and Energy, more progress would have been recorded but for the coronavirus pandemic that caused between eight and nine months’ delay. Also, workers organized strikes several times to demand an improvement in their working conditions. Finally, the strikes ended with a strong implication of the government, which sometimes sent ministers on-site to appease the social tensions.

“We asked the firm in charge of the construction [ Nachtigal Hydro Power Company] to make every possible effort to meet the new deadline. The new deadline provides that the first machine will be starting operations in July 2023 and the seventh and last in Jul 2024,” Gaston Eloundou Essomba informed.

Initially, the first turbine of the Nachtigal dam would have been operational by September 2022 and the whole dam by the end of 2023.

The energy infrastructure will generate over 2,900 GWh yearly. A result of XAF786 billion investment, the Nachtigal hydroelectric dam is the largest energy infrastructure ever built in Cameroon. The fund for its construction was raised through a public-private partnership between Cameroon and many financial and technical partners. This financial arrangement negotiated by Cameroon for the project is celebrated by finance experts. Its partners in the project are Électricité de France (EDF), Société financière internationale (SFI), Africa50, and STOA Infra & Energy, which created the construction company (with EDF as 40% shareholder).