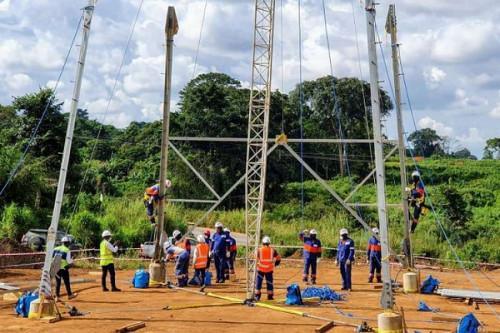 (Business in Cameroon) - The 225KV transport line between the 420MW Nachtigal dam and Nyom II will be delivered in July 2021. The information was revealed by Justin Ntsama, construction manager in charge of the Nachtigal dam, in an interview with the government daily Cameroon Tribune.

The construction of that 50.8-kilometer line was launched in early 2020, with Bouygues Énergies & Services as the contractor. The line is constituted of 123 pylons weighing between 10 and 80 tons while their heights vary between 40 and 5 meters. Thanks to that infrastructure, the energy produced at the Nachtigal dam will be injected into the Southern interconnected grid, which covers six of Cameroon's 10 regions (excluding the three northern regions and the East).

The first of the 123 pylons of this transmission line, "which is located in the Nkol Nguem village, started on September 11 last year (2020) and was completed on September 21, 2020," the project company Nachtigal Hydro-Power Company (NHPC) informed a while back.

The Nachtigal hydroelectric dam is the result of about XAF786 billion investment. It is expected to start operations in 2023 and increase Cameroon’s electricity generation capacity by one-third.