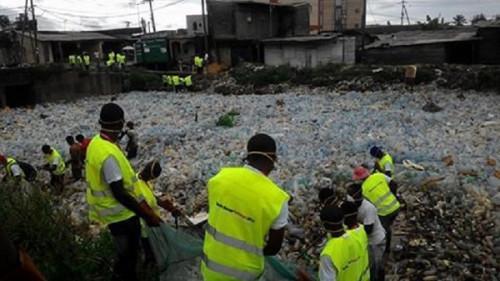 (Business in Cameroon) - Sociétés Anonymes des Brasseries du Cameroun (SABC) and its partner, Namé Recycling pointed out that in three years of collaboration (2017-2020) they have collected and recycled 100 million plastic bottles in Cameroon.

According to Roblain Namegni (general manager of NGO Namé Recycling), the 100 million plastic bottles are the equivalent of 1,480 polluting cars removed from road traffic, or 7,700 tons of carbon dioxide captured from the atmosphere. The effort applauded because every bottle collected counts, he commented.

According to Emmanuel de Tailly, CEO of the SABC, the brewing group’s plan for an effective fight against plastic bottle pollution is to contribute to the creation of about 100 companies or associations in the ten Cameroonian regions. Those companies or associations will form a large local collection network needed for Sustainable Waste Systems in the circular economy.

In 2012, to assume its responsibility as a leader in the production and distribution of drinks bottled in PET containers, SABC launched "Plastic Récup", a project aimed at combating plastic waste, which is a significant source of pollution. In 2017, it partnered with Namé Recycling with the aim to collect and recycle 82% of the plastic bottles produced in all of its plants in Cameroon.

Behind this partnership lies a desire to create an environmental value chain around the recycling industry, which will benefit communities and generate incomes for the population.

It is worthy of note that the SBCS Environmental actions is within the context of COP 21 (21st Conference of Parties), popularly known as the Paris Agreement, during which signatory parties, including the Cameroonian Goverment, committed to reducing emission levels by 32% by 2035. The COP21, was convened by the UNFCCC (United Nations Framework Convention on Climate Change) in 2015, in Paris