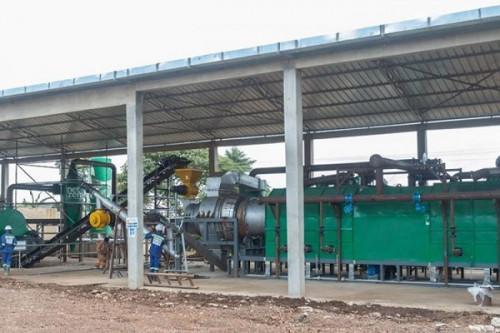 (Business in Cameroon) - During the COP26 that started in Glasgow, Scotland, on November 1, Cameroon made headlines. According to environmental experts, the country became the first in the world to integrate industrial biochar production into its climate and sustainable development strategy.

The strategy was presented on November 9, 2021, by the Cameroonian delegation constituted of Ministers Hélé Pierre and Jules Doret Ndongo under the leadership of Minister of External Relations Lejeune Mbella Mbella. Officially, to help fight climate change, Cameroon plans to establish some fifty biochar production plants by 2030.

As an expert reveals, "biochar is a solid product with high carbon content, similar to charcoal powder. It is produced by extracting carbon from agricultural residues through pyrolysis.” According to an authorized source, this process includes facilitating the chemical decomposition of an organic component by substantially increasing its temperature  (between 350 and 650 ℃ without oxygen) to obtain totally different chemical compositions. By producing biochar, Cameroon hopes to eliminate at least 250,000 tons of CO2 (the greenhouse gas responsible for global warming and ultimately climate change) from the atmosphere.

To achieve its industrial biochar production goal, Cameroon contracted the carbon removal venture NetZero. The firm recently delivered (within just four months) the first biochar production plant ever installed on the African continent. This plant was installed in Nkongsamba, Littoral Region, Cameroon. The 500-square-meter plant is able to process 10,000 tons of waste. "In Cameroon, the replication potential is huge given the million tons of unused agricultural residues generated by the agro-industry,” an expert n the field comments.

According to sources close to the case, Cameroonian authorities also intend to capitalize on the other opportunities offered by biochar, in the agriculture and energy sectors notably.

"Mixed with the subsurface of agricultural lands, biochar is also a proven way to sustainably improve water and nutrient retention in soils and thus crop yields  (...) Biochar production process releases renewable energy in the form of gas, which can be transformed into electricity," reads a note prepared by Cameroon and its partner NetZero, for the COP26.