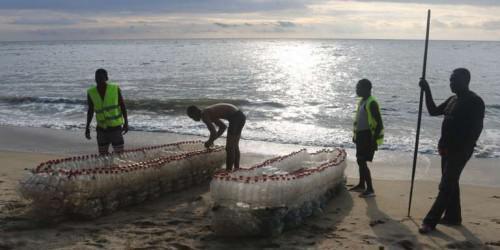 (Business in Cameroon) - Since August 2016, a small revolution have been slowly taking place in the fight against the pollution of the environment in camera, specifically against plastic bottles. Indeed, it was then that Ismaël Essome, a young engineer in environmental management, created the very first ecological canoe in Cameroon, made with recycled plastic bottles. Cost of the investment: close to FCfa one million.

“At the beginning, we had to find the shape and good thread to bind the bottles. We spent days on this. Later on, we carried out tests between Douala, our base and the beaches. We added modifications. We are constantly trying to improve”, explains the young engineer to Le Monde Afrique, who followed him during a test of his invention off a Cameroonian beach. “I do not fear the waves (...) This canoe is very solide, it can take you anywhere. I had dreamt of building it for so long”, he continues.

Indeed, by simply assembling plastic bottles, bound with a specific rope, Ismaël Essome managed to build a cable capable of transporting three people and a weight of 90 kg on water, while resisting against waves. According to the inventor of this 100% environmentally-friendly canoe, his finding has three main objectives.

Firstly, to encourage seaside tourism, by making available to tourists this very special canoe. Then, it is about cleaning the environment, by recycling plastic bottles, which have not yet disappeared from the streets, streams and other drains in the country, despite the existence, since October 2014, of a regulatory text enjoining producers of this type of packaging to systematically implement recycling chains. Finally, the young environmentalist want to protect trees, this component of the environment whose trunks serve as material to manufacture canoes in the coastal regions of Cameroon.

If financiers could take interest in the project, by encouraging the modernisation and marketing of these canoes, according to Ismaël Essomé, not only would the war against plastic bottles be won, the destruction of trees would be greatly reduced, but fishermen and other river transporters would spend far less money to purchase a canoe. As the price of FCfa 100,000 per eco-friendly canoe will be largely below that of wooden canoes, which varies between FCfa 150,000 and 500,000, against at least a million FCfa for synthetic canoes.