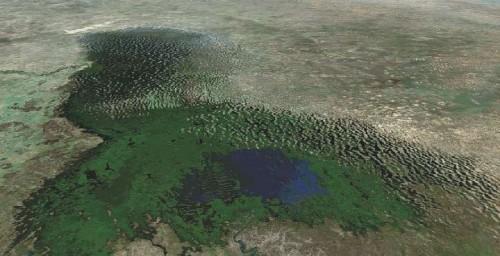 (Business in Cameroon) - Preservation of Lake Chad was at the heart of an international workshop opened last Friday in Douala.

“The wars of the future will be wars over water if nothing is done,” Alex Blériot Momha noted.

An expert working for the Lake Chad Basin Commission was speaking on June 19, at the opening of a three-day workshop in Douala, according to the bilingual daily, Cameroon tribune.

There are growing concerns due the drastic reduction of water in the lake. In half a century, its water volume dropped from 25,000 square kilometers to 2,500 km2 due to the combined effects of climate change, desertification and ever growing population.

Its reduction has an effect on humans and the environment. Pierre Marie Ngnike, representative of the Minister of Water and Energy (MINEE) spoke of “human drama” that would cause the disappearance of Lake Chad, possible within 20 years.

Moreover, the gradual reduction of the body of water is already a source of migration, not to mention the impact on the agricultural level, fish and wildlife.

“It is better to prevent conflict than to have to manage it,” says Prof. Mama Plea, representing Benedict Sosso, resident representative of UNESCO in Cameroon.

Concrete actions are planned to save Lake Chad, according to Alex Bleriot Momha, who mentioned a project to transfer water from the Ubangi River.