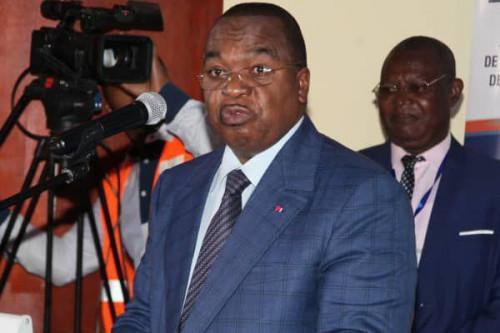 (Business in Cameroon) - Yesterday June 30, the Cameroonian government announced the stellar success of its XAF450 billion Eurobond refinancing operation. Issued in 2015, the Eurobond the country is refinancing was supposed to be amortized over the 2023-2025 period.

“ Cameroon has made a welcoming return on the international capital market, this first semester of 2021,” Finance Minister Louis Paul Motaze (photo) informs.

The new maturity of that Eurobond is 11 years and the interest rate is 5.95%. This interest rate is quite an achievement considering the 9.5% interest rate on the initial Eurobond (the interest rate came down to 8.8% after the swap operation aimed at mitigating currency risks by getting the debt denominated in Euro, instead of the US dollars the debt was issued in). This time, the bonds are denominated in Euro and subscriptions reached 3.2 times the initial amount Cameroon was sourcing. Indeed, for XAF450 billion sourced, investors offered a whopping XAF1481.15 billion.

Besides the quality of Cameroon’s signature, another factor contributed to this success. This is namely the current international context marked by investors’ high appetite for debt instruments issued by emerging countries. This year, several African countries have capitalized on that context to raise funds for their various projects. Ecofin Agency, which was monitoring the performance of the 2015 Eurobond, had already pointed at investors’ rush towards the bond and even predicted that the interest rate Cameroon would obtain on that Eurobond will be much less than the 9.5% obtained during the initial issuance.

This interest in the bond was confirmed when 80% of the existing investors who invested in the first Eurobond invested in this new one. Meanwhile, when the country announced the refinancing operation, it met the opposition of some parties who saw this as a way to unnecessarily increase the debt burden.

However, the government had to make a choice. Starting from 2023, had it not refinanced the Eurobond, it would have been obliged to disburse XAF150 billion yearly till 2025, to amortize the funds secured. This situation would have been difficult to sustain given the foreign exchange problems in the CEMAC region.

By refinancing the Eurobond, the country has extended the amortization deadline and at the same time reduced the pressures on foreign exchange resources since the debt services are reduced now. Also, with the new interest rate, Cameroon is setting a new benchmark thanks to which it can now serenely enter the international capital market. Nevertheless, international institutions still remind that the current low-interest rates’ performance African countries are recording in the Eurobond market should not be taken for granted. So, they should still be cautious.