BCP finalizes the acquisition of 68.5% stake in Bicec 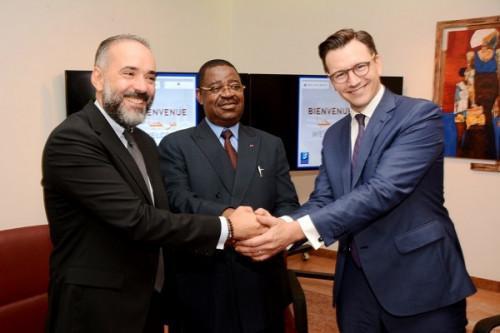 (Business in Cameroon) - On October 1st, 2019, Morrocan banking group Banque centrale Populaire (BCP) officially finalized the acquisition of a 68.5% stake in Banque Internationale du Cameroun pour l’épargne et le crédit (Bicec). Till that acquisition, the assets were owned by French group BPCE (Banque Populaire et Caisse d’épargne). According to Bicec, the transaction, whose details have not been revealed, was completed after all the regulatory approvals had been made.

An official ceremony was organized, for the acquisition, at Bicec’s headquarters in Douala-Bonanjo. It was attended by Kamal Mokdad, BCP’s head in charge of international affairs, Jean-Baptiste Bokam, president of Bicec’s administrative board, and Rochdi Sanhaji, the new managing director of Bicec.

“By joining Banque centrale Populaire, Bicec is entitled to better banking practices, innovations, and expertise adapted to the African market. With the support of its new core shareholders, BCP and the Cameroonian government, Bicec is beginning a new development phase, by putting client satisfaction and the promotion of local talents at the center of its priorities,” Kamal Mokdad said.

Let’s note that on September 24, 2018, BPCE announced that it had entered exclusive negotiations with BCP for the sale of its African subsidiaries, including Bicec Cameroun.

Following the announcement, two Cameroonian lawyers, Michel Janvier Voukeng and Guy-Alain Tougoua, went before the court to oppose these negotiations for the lack of competition in the process. Since October 2018, the legal proceeding is still open before Bonanjo lower court, in Douala.

On October 12, 2018, the lawyers also requested the national competition authority’s intervention. In November 2018, the authority initiated the necessary steps to ensure the sale is legal. The same lawyers requested the intervention of the capital markets’ commission, previously regulating what used to be bourse des Valeurs mobilières de Douala. However, this commission declared that it did not have jurisdiction to rule in the case.

Thanks to the acquisition of majority stakes in Bicec, BCP, which already controls Banque Atlantique (that owns a subsidiary in Cameroon), is reinforcing its imprint on the Cameroonian banking sector. It will also operate alongside its compatriot Attijariwafa Bank, which is a major stakeholder in Société commerciale de Banque Cameroun (SCB Cameroun) and Asca. Asca is an asset management company operating all over the CEMAC region but also present in the bank insurance sector via Wafa assurances.