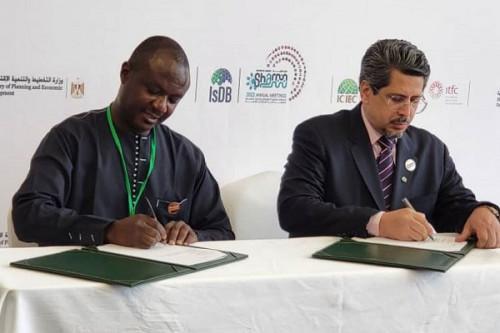 (Business in Cameroon) - Youssoufa Bouba, Deputy MD of Afriland First Bank, yesterday signed an agreement with the Islamic Corporation for the Development of the Private Sector (ICD) to open a €40 million credit line (a little more than CFA26 billion). The signing ceremony took place in Sharm El-Sheikh, Egypt.

This facility, co-financed by the Arab Bank for Economic Development in Africa (Badea), will allow Afriland First Bank to “further support SMEs and SMIs and promote Islamic financing in the Cameroonian business community.”

"The agreement confirms our commitment to strengthening the impact of Islamic financing in the development of Cameroonian SMEs alongside Afriland First Bank, a pioneer of Islamic finance in Central Africa and a leading institution in the Cameroonian banking sector," explained Ayman Sejiny, the CEO of ICD. This new deal brings to three the number of credit facilities made available to Afriland First Bank by this partner since 2016, for an overall amount of over €100 million, or more than CFA65.5 billion.

A lever for financial inclusion

This method of financing the economy, based on the equitable distribution of wealth and the prohibition of profit, is not very widespread in Cameroon. Until 2019, according to official data, only one bank and three microfinance institutions, out of nearly 500 licensed institutions, had an Islamic financing window. To make it more popular, the Ministry of Finance and the UNDP organized in 2019 in Yaoundé a forum on its contribution to the economic growth of Cameroon and the achievement of sustainable development goals.

Louis Paul Motazé, the Minister of Finance, believed that this financing approach "can promote the development of financial inclusion, targeting all those still excluded from the traditional financial system for cultural reasons; constitute a complementary lever for economic growth by attracting foreign investment, including those from some countries in the Middle East wishing to recycle their excess liquidity."