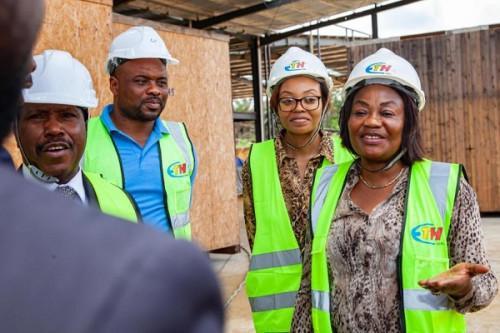 (Business in Cameroon) - Jacqueline Dongmo, a Cameroonian entrepreneur and founder of Coca-Cola Gracedom Bottling Company, successfully raised CFA50 billion to launch her business. Her company is the local dealer of US giant Coca-Cola.

The production unit, located in Kake –about 30 km from Douala, was initially expected to begin production on September 30 but the new schedule is the end of the year. The financing raised by Jacqueline and her partners was used to install three soft drink production lines for Coca-Cola, Fanta, and Sprite brands and acquire rolling stock for their distribution. Official sources revealed that the money was mobilized through support from shareholders and banking loans, mainly from Commercial Bank Cameroon (CBC) and BGFIBank Cameroon.

“We made CFA20.5 billion available for the project, overall: CFA15.5 billion in March and the remaining CFA5 billion in September,” a major source at BGFIBank Cameroon said, meaning the banking group has provided 41% of the project budget. The group’s Chairman, Henri-Claude Oyima, is closely following the project. Sources said he has even visited the production site.

While the first bank revealed its financial contribution, the second -CBC- refused to disclose any information. "This is a matter of professional secrecy," the bank said, stressing that it is one of the project’s carriers. Indeed, "CBC has had a business relationship with the promoter of Gracedom Invest for over 20 years. It is as part of this relationship that we have helped the company set up a production and marketing unit for juices and mineral water under its own brand".

With the signing of the deal with Coca-cola, the company has boosted the capacity of its production unit from an initial 20,000 bottles per hour to 80,000 bottles. And the investment increased from CFA25 billion to CFA50 billion. "The project promoter, aware of our expertise in syndicated financing and because of the good relations we have, mandated us to raise additional funds," says CBC's top management.

Both banks -Commercial Bank Cameroon (CBC) and BGFIBank Cameroon- say they were attracted by the viability of the project and its socio-economic impact (about 3,000 direct and indirect jobs to be created). Also, Coca-Cola Gracedom Bottling Company plans to capture 7% of the soft drinks market share in the first year and 30% after five years, according to information relayed by Jeune Afrique magazine. This reassures the banks they will their money back as well as the interest and commissions on it.