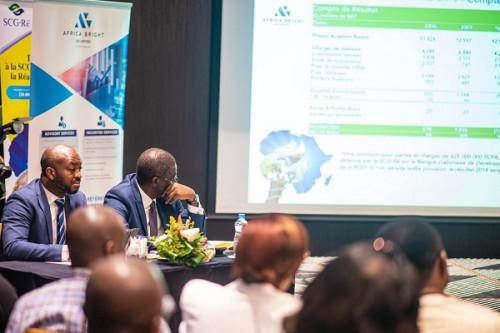 The delegation, led by Andrew Gwodog, the managing director of SCG-Ré, met with local investors and presented the opening of the company’s capital as a profitable investment opportunity. Selected among Gabonese companies to be listed on the stock exchange, as part of the revitalization of Bvmac, SCG-Ré is issuing 250,000 new shares on the sub-regional financial market, at CFA 20,000 each. These shares will be available from November 1 to 30. The procedure will increase the share capital of the Gabonese company from CFA10 billion to CFA15 billion.

After this first step on the Bvmac primary market, the assets of SCG-R2 acquired on the market will then be listed on the secondary market, to allow transactions that could bring capital gains for the holders. The Gabonese company, more than 60% of which is owned by the Sovereign Wealth Fund of the Gabonese Republic and the Gabonese Strategic Investment Fund, has shown positive performance in 10 years of activity.

According to official data, SCG-Ré posted a 7% increase in turnover, reaching CFA14.6 billion in 2021. In the same year, the company also achieved a profit of more than CFA1 billion, as in 2020. SCG-Ré seeks to increase its turnover from more than CFA14.6 billion in 2021 to CFA25.5 billion by 2027. For the next five years, it plans to distribute an average of 50% of its net income to shareholders who will subscribe to the public offering.

The effective start of subscriptions makes SCG-Ré the second company that is effectively implementing its listing on the stock exchange under the revitalization process. The first listing of the Equatorial Guinean banker Bange took place on September 28, 2022.

The State of Cameroon, meanwhile, is still preparing to list four companies in its portfolio. They include the Cameroon Airports Company (ADC), Cameroon Hotels Corporation (CHC), owner of the Yaoundé Hilton Hotel; the Port Authority of Douala (PAD); and the Cotton Development Corporation (Sodecoton).