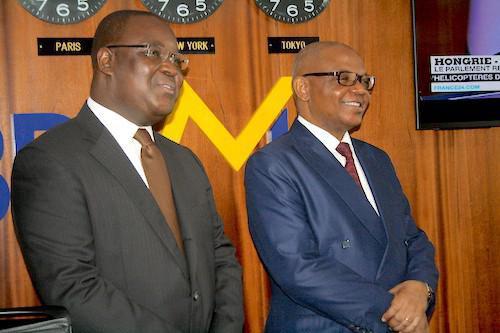 (Business in Cameroon) - Jean Claude Ngbwa, President of the Financial Markets Commission (CMF) of Cameroon, the regulatory body of the Douala Stock Exchange (DSX), the stock market of the country; had a work visit on 8 November 2016 in Abidjan, Côte d'Ivoire, at the headquarters of the Bourse régionale des valeurs mobilières (BRVM), the West African States stock market.

“I came to draw inspiration from the BRVM experience”, declared the President of CMF at the end of the work session with the management of this financial market, though not without specifying that “coming to the BRVM was a must, considering the performances of the UEMOA financial place these past years”.

Indeed, we officially learned, this visit is part of the tour undertaken by the President of CMF to international and African financial places since his appointment, in order to draw inspiration from the best practices for the development of the Cameroonian financial market; which Jean Claude Ngbwa dreams will finally reflect the true economic potential of the country, real economic lifeline of Central Africa.

As a reminder, after a long period working at CIMA, the regulatory body in the insurance sector in Western and Central Africa, Jean Claude Ngnwa was appointed to the presidency of CMF on 29 June 2016. He thus became the regulatory authority of a financial market which only lists three stocks, after 10 years of activity, against five obligations. Its market capitalisation as at 17 June 2016 was only slightly higher than FCfa 405 billion.

Though more comparable to the Bourse des Valeurs Mobilières d’Afrique Centrale (BVMAC), which is even less dynamic than the Cameroonian financial market, BRVM has reached a market capitalisation of FCfa 6,887.47 billion as at 27 October 2016. About forty companies are listed on this market. A certainly attractive performance for the management of the Cameroonian financial market, visibly shunned by the private sector. Indeed, these operators, who are constantly criticising the difficulty in accessing funding in the country, are content with only taking part in the bond issuances organised by the Cemac States on this financial market located in the economic capital, a city where 79 of the 100 top companies in Cameroon in terms of revenues are however located, according to a list created by the National Statistics Institute (INS).

Even the tax incentive measures taken by the Cameroonian State, in particular a substantial reduction in the corporate tax for listed companies, have not yet succeeded in attracting companies to the Douala Stock Exchange.