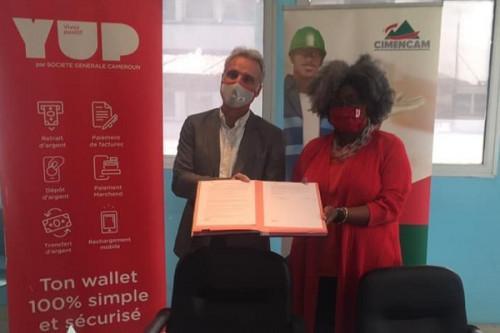 (Business in Cameroon) - On February 10, 2021, Cimenteries du Cameroun (Cimencam), a subsidiary of LafargeHocim Maroc, signed a partnership agreement with YUP (Société Générale's Mobile Money operator) with a view to integrating this payment into its cement distribution network. Thanks to that partnership, distributors, and users can now use YUP to pay for their orders placed through the company's application "MyCimencam".

"This agreement falls within the framework of our strategy aimed at developing digital tools that will make it easier to market products and simplify the customer's life through the dematerialization of payment methods," explains Cimencam's Managing Director, Benoit Galichet. According to internal sources, in 2020, LafargeHocilm Maroc generated about 63% of its turnover (i.e. about 15,000 orders) from sales received through the"MyCimencam", which has been operational since July 2019.

In the Cameroonian cement market, Cimencam is cornered by its immediate competitor Dangote Cement. In 2020, Dangote Cement had 39% of the market share, compared to nearly 40% for Cimencam. Less than two years after the launch of its activities in Cameroon in 2016, the cement plant of Nigerian billionaire Aliko Dangote has even supplanted Lafarge group (now Lafarge-Holcim), which reigned monopolistically on the local cement market for 48 years.

This performance can be explained by the very rapid expansion of the Dangote Cement distribution network. Indeed, after a disagreement with Cameroonian transporters on the terms of the distribution of its cement soon after it launched operations in Cameroon, Dangote cement imported 200 new trucks to supply the market. Meanwhile, Cimencam was facing the whims of carriers who were becoming more demanding as far as compensation for their services is concerned.