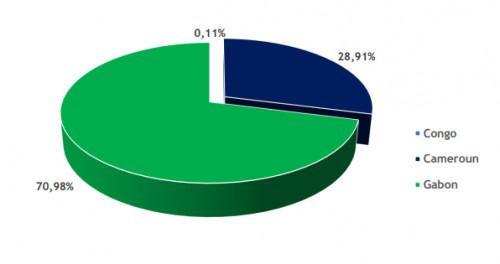 (Business in Cameroon) - At the end of its 2021-2026 bond issue operation (the sixth in the history of the country’s public finance), Gabon raised XAF188.8 billion against a XAF175 billion target, the closing report informs. Out of that amount, Cameroonian investors subscribed 28.9% (AF54.5 billion), we learn.

As for Gabonese investors, they subscribed 70.9% (XAF134 billion) of the overall subscriptions, against 0.11% (XAF200 million) for Congolese investors. This time, unlike most of the past fundraising operations, Cameroon is not the leading subscriber to the bond issue operation of this country. However, it did play a significant role since its investors largely contributed to the achievement of the financing target set by this neighboring country.

An analysis of the closing report shows that the operation was already concluded long before its launch because some Gabonese and Cameroonian financial institutions had already underwritten the bond. Specifically, eleven financial institutions underwrote XAF188.128 billion. They include five Cameroonian institutions (Commercial Bank Cameroun, Banque Atlantique, Afriland First Bank Africa Bright Securities and Financia Capital) which underwrote XAF75 billion worth of bonds during the operation. The remaining amount was underwritten by six Gabonese institutions.

According to authorities, that 5-year bond issue, backed by a 6% interest rate will help the country pay its debt whose moratorium has already been validated, and fund its urgent projects.