Covid-19: EU member countries estimate their support to Cameroon at over CFAF18 bln 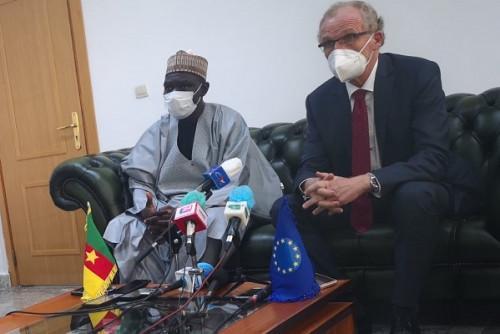 (Business in Cameroon) - The institutions and member states of the European Union estimate their support for Cameroon in the framework of the coronavirus pandemic at over CFAF18 billion (€14 million).

In detail, the EU contributed CFAF 9 billion; while individually, Germany, France, and Italy contributed over CFAF 2 billion, CFAF7.2 billion, and CFAF 164 million respectively. These resources were provided to the government, the World Health Organisation’s (WHO) representation in Cameroon and civil society organizations. Out of the CFAF7.2 billion provided by France, 6.5 billion went to the government, same for about CFAF 6 billion from the funds provided by the EU.

The resources mobilized by the EU come from all its member states even those not represented in Cameroon and is an early disbursement of part of the budget support planned for the 2020 financial year.

"Through this flexibility, the EU intends to support the state treasury while underlining the importance of transparent, effective, and efficient management of public funds," the EU delegation in Yaoundé explained.

Apart from this CFAF18 billion support, the country has also benefited from the one-year postponement of the 2020 debt service following the announcement made by the Paris Club, of which several EU states are members.