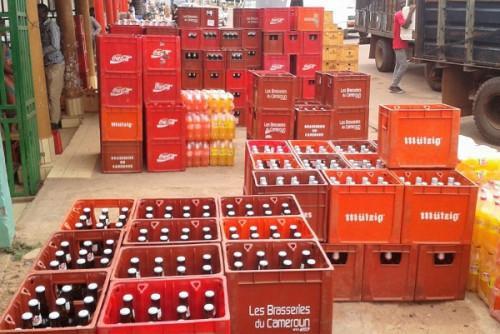 (Business in Cameroon) - In a press release to investors, published on 21 January 2020, Société Anonyme des Brasseries du Cameroun (SABC), a subsidiary of French group Castel, forecasts consolidated net income of about XAF16 billion in FY2019. According to the projection made, that income would be down by 34% compared with the XAF24.3 billion recorded during the 2018 financial year.

SABC explains this projected drop, in part, by the decline in the volume of its activities in 2019. Indeed, it indicates, the volume of beer sales, excluding free beers, should be 4.6 million hl, down 2% compared to the year 2018. Sales of mixed alcohol should fall by 1% to 0.3 million hl.

Despite an expected increase in water sales (32% to 0.9 million hl), the consolidated pre-tax turnover from the products sold by the company during the period under review is expected to drop from XAF333 billion (in 2018) to XAF310 billion. This represents about 7% decrease.

In addition, Société camerounaise de verrerie (Socaver), a subsidiary of the SABC, experienced an exceptional decline in H1-2019 due to the planned shutdown (between January and August) of furnace N°2 for reconstruction. For H1-2019, Socaver's net loss amounted to XAF3.3 billion against a net profit of XAF796 million for H1-2018.

Despite the normal resumption of activity of furnace N°2 in August 2019, it is officially reported that Socaver's net profit for the second half of 2019 should remain insufficient to compensate for the loss already recorded in H1-2019.