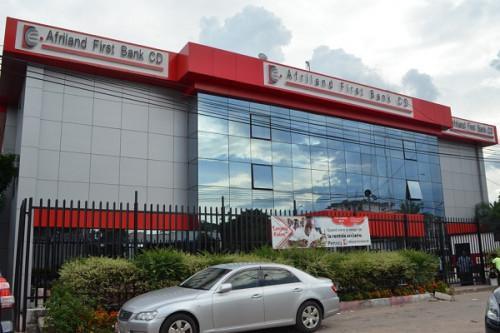 (Business in Cameroon) - For about a year now, Afriland First Bank CD - 95.6% owned by Afriland First Group- is ripped apart by internal conflicts. The bank’s majority shareholder accuses the former managing director and one of the minority shareholders -who died in circumstances deemed unclear by his supporters- of financial malpractice. The minority shareholders, on the other hand, accuse the majority shareholder of collecting “undue" dividends and robbing the DR Congo subsidiary through technical assistance contracts. The conflict has now taken on a political and legal dimension. Business in Cameroon looks into the case.

Since June 20, 2022, Afriland First Bank CD, the DRC subsidiary of Afriland First Group (AFG), is under provisional administration. The change of administration was notified to the public through a notice signed the same day by  Marie-France Malangu Kabedi Mbuyi, Governor of the Central Bank of the Congo (BCC).

The document signed by this Congolese economist, who is well known in Cameroon for having served as the IMF's resident representative, immediately appointed the seven members who make up the provisional management committee of this credit institution, which is 95.6% owned by AFG.

The decision comes just a few days after the Congolese Council of Ministers held on June 3, 2022. During this meeting, finance Nicolas Kazadi, who is also chairman of the Financial Stability Board, stressed “the urgent need for the central bank to resolve the challenges being faced by Afriland First Bank CD, in a strict application of the national banking law.”

The shady game by the Congolese state

In the same document explaining the origin of the crisis that led to the June 20, 2022, decision, AFG also pointed an accusing finger at the Congolese government. “The decisions issued during the January 21, 2022, board meeting reorganizing the bank and appointing new managers were surprisingly suspended by the  State Council despite the central bank taking note of those decisions. This situation paralyzes the bank, which for months now has no management or supervisory body (...), leaving the banking institution in the hands of the former MD and his supporters,” it wrote.

All the causes of the crisis shaking Afriland First Bank CD are not known yet. But, in its June 3 release, AFG indicated that as of June 30, 2021, the bank was in good financial standing “with Tier 1 capital of  $48.4 million (more than CFA30 billion), and was compliant with all the prudential ratios.” The crisis got worse from July 1. 2021, we learn. “When alerted by the auditor of possible financial malpractices with supporting evidence, the Chairman of the Board of Directors suspended the CEO (Ed.note: Cameroonian Souaibou Abary at the time) for further review, in line with the statutory provisions.”

But the Central Bank of Congo vetoed this decision and Souaibou Abary resumed his position the following day. It then withdrew the chairman of the board’s approval. Between July and November 2021, it did the same for all the remaining board members. In the meantime, the Board of Directors of January 2022 took place and a new management team was appointed. However, these appointments and other decisions, which had been approved by the Central Bank of Congo, were subsequently invalidated by the State Council.

The crisis was escalated by the bank’s former Deputy MD, who (according to documents seen by Business in Cameroon, became the acting CEO although we have no proof of his appointment to that post after the death of Souaibou Abary who died in circumstances deemed unclear and criminal by minority shareholders in a memo they sent to BCC’s Governor.

As acting CEO, Patrick Kafindo Zongwe, who is accused by Afriland First Group of waging "an administrative and politico-judicial war," asked the Kinshasa commercial court to appoint a provisional administrator on April 13, 2022. The provisional manager was supposed to temporarily manage the bank and proceed with an evaluation of the shareholders' capital, the appointment of a general manager, new directors, and the replacement of a deceased partner. But, although the Court had considered the request of the acting CEO admissible, during its hearing on April 22, 2022, it instead directly appointed two "ad hoc administrators" in the persons of Ide Bopilo Walo and Foko Lumengu.

Appointed for six months, the two ad hoc administrators have the following duties: audit the management, accounts, and assets of the bank; evaluate the debts and claims; convene an extraordinary general meeting to prepare the takeover of the bank by the managers who will be designated by the shareholders. But, against all expectations, Patrick Kafindo Zongwe, on April 29, 2022, appealed the decision and asked for its cancelation, on the one hand, and the appointment of new representatives of the bank, on the other hand.

Curiously, the court once again granted the request and appointed new representatives to head Afriland First Bank DR Congo. Subsequently, Ide Bopilo Walo, the ad hoc administrator appointed in the first place by the court, referred the matter to the same court which, on May 3, 2022, admitted to having been misled by Patrick Kafindo Zongwe. The latter was therefore denied the right to act on behalf of the bank, while the status of the two ad hoc administrators was confirmed.

However, “the court decision was not enforced. Ide Bopilo and Lionel Foko were unable to assume their ad hoc administrative duties. They were prevented from doing so by law enforcement agents deployed by Patrick Kafindo. Following that episode, they never returned to the bank,” an internal Afriland First Group source told us. In addition, the decision issued by the central bank on June 20, 2022, to put Afriland First Bank CD under provisional administration stripped the ad hoc administrators of their duties even before the end of their 6-month mandate.  This situation could well lead to a new twist.

Afriland First Group was accused of defrauding its Congolese subsidiary

For Afriland First Group, one of the main instigators of the crisis is Patrick Kafindo Zongwe. In a memo sent on June 3, 2022, to the governor of the central bank of the Congo, Patrick Kafindo Zongwe revealed several grievances made to Afriland First Group and its promoter, the Cameroonian Paul K. Fokam. Patrick formed a collective of minority shareholders with three other shareholders (including the wife of late MD Souaibou Abary).

The collective claimed that “this technique of illegal enrichment has caused the bank to lose about $15 million (nearly CFA95 billion), excluding the effects of taxation..."

“As if much harm was not done yet, the payments are made in the form of installments, even before the annual-tax turnover are generated,” the minority shareholders wrote. As proof of the installment payments, they attached March and December 2019 payment invoices.

Furthermore, the majority shareholder of Afriland First Bank DR Congo is accused of "collecting undue dividends" between 2009 and 2018, because, between that period, he did not pay the amount of the shares he subscribed to in 2009 when the subsidiary’s capital was increased.

Finally, to prove that the promoter of Afriland First Group is accustomed to conflicts, the minority shareholders mentioned his once tense relationship with the regulator of the banking sector in Central Africa (Cobac). They also mentioned his suspension in 2019 from the post of chairman of the board of directors of his insurance company, as well as his recent exit from E. Guinea, which led to the transfer of his assets in CCEI Bank Equatorial Guinea to the state.

The situation suggests that Paul Kammogne Fokam's banking company is going through a turbulent period. In less than two years, the banking group has exited one of its subsidiaries (CCEI Bank Equatorial Guinea) and launched procedures for the voluntary liquidation of two of its subsidiaries.

In Uganda, the group justified the voluntary liquidation process, after only two years of activities, by its strategic orientations. In Equatorial Guinea, the sale of assets worth CFA30 billion was the result of a breach of trust with President Obiang Nguéma Mbasogo, who had noted a lack of "transparency in transfers between CCEI Bank and the Cameroonian subsidiary.”