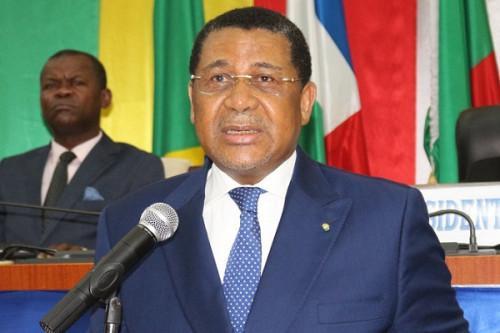 (Business in Cameroon) - The volume of unpaid community integration tax owed by members of the CEMAC community was estimated at XAF80 billion at end-2020. This was revealed on January 23 by Daniel Ona Ondo (photo), President of the CEMAC Commission, during his opening speech for the preparatory works at the 36th meeting of the Ministers of Economy and Finance of the member States of this subregion (announced for January 27, 2021). The meeting will focus on the examination and adoption of the community’s 2021 budget.

Instituted in 2012, the community integration tax was aimed at financing the regional integration process. It is a 1% levy on the taxable value of products imported from outside the community space. Each member country was to collect the tax and pay it to the commission but public treasuries do not do it systematically. Hence, the accumulation of the tax arrears, which is supposed to be the main source of finance for the community’s budget.

According to official sources, the draft 2021 budget that will be submitted to the ministers for validation amounts to over XAF89.2 billion. It is up by over 1% compared to the XAF88.2 billion adopted in 2020.

To finance that budget, the commission expects nearly XAF63 billion of community integration tax (including XAF28 billion of arrears) representing over 70% of the budget resources. If adopted, the proper implementation of the budget will depend on the recovery of that tax. But, the commission considers its revenue forecast to be realistic. "The current forecasts for the community integration tax to be recovered in 2021 is XAF35 billion, despite the potential estimated at XAF88 billion," it indicates.

However, from experiences and due to the current economic crisis, Cameroonian officials believe that the collection of these resources is far from guaranteed.

"To achieve the goals we set and for the optimal operation of our community, we more than ever need to inject more resources. In that regard, I would like to urge the various representatives of our member states to advocate for the payment of the community integration tax and the reduction of the arrears," pleaded  Charles Assamba Ongodo, general director for cooperation and regional integration at the Cameroonian Ministry of Economy and also President of the inter-state commission carrying out the preparatory works.

But, will his plea be listened to? Experiences hint to a "No" as an answer. Indeed, the difficult collection of community integration tax has often been debated, even by the Conference of Heads of State, that is the highest CEMAC community body. However, there is no tangible solution to these difficulties.

In late 2017, at the end of the conference of heads of State, the attendants decided to cancel 90% of the outstanding community integration taxes, for a fresh start. Three years later, the arrears have risen to about XAF80 billion.

Corroborative sources indicate that member countries are reluctant in paying the tax because they are not satisfied with its management. The council of ministers of the CEMAC therefore ordered a survey on the fiscal sustainability of the community’s bodies and organs.  According to our information, a first version of the results has been sent to the commission.

Without providing further details on the results, Daniel Ona Ondo promises to exploit the report to make its missions more effective. He, however, estimates that the report should not be "a pretext to become complacent in the collection of the community integration tax whose use is governed by the solidarity principle" that he believes is the cornerstone of the Central African Economic and Monetary Community (CEMAC).