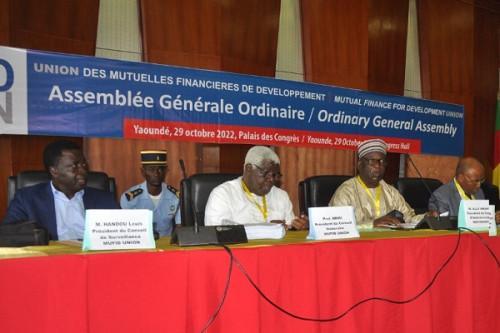 (Business in Cameroon) - During its ordinary general assembly meeting on October 29, 2022, MUFID Union, the association of Cameroonian financial mutuals, reviewed the actions to be taken to make it the local agricultural financing leader. According to internal sources, from 1992 when the first MUFID -microfinance institutions of some sort- was created to June 2022, the network has granted over XAF350 billion loans; 24.6% of that loan went to agropastoral activities. This equates to XAF86 billion in agricultural financing in 30 years and an average of XAF3 billion yearly.

MUFID Union, which is currently led by Justin Bomda, wants to increase that commitment. Therefore, it is currently devising an agricultural financing project, in collaboration with the German Ministry for Economic Cooperation and Development (through the German Confederation of Cooperatives DGRV).

The project consists of the elaboration of an “agricultural financing system” for the 94 first-class microfinance institutions that make up the MUFID Union.  It aims to enable the institutions to “offer a range of agricultural products and services -agricultural value chain financing notably- adapted to its members in rural and peri-urban areas,” we learn.

In the framework of the project, in late 2021, engineering firm IDF Corporate and consulting firm Agro-PME were contracted to carry out a diagnosis study.

The said study identified three financial products and services to be “refined or improved, to increase the value proposition for the MUFID Union’s agripreneurs who express very diverse financial needs for their activities.”

The first product is warrantage (a type of warehouse receipt financing) on agricultural products which increase in value when stored (corn, cocoa, etc.).

There is also credit to cooperatives operating in strategic sectors or credit for contract farming between agribusinesses and small farmers.  The third is compulsory savings, the resource mobilization challenge.

The study also highlighted the need to support beneficiaries (advice, training, information), strengthen the capacities and mobility of staff dedicated to agricultural financing, and digitalize and popularize Mufid services...

The financial mutuals were first known as Mutuelles communautaires de croissance (Mc2). In 2017, after the adoption of a new regulation on microfinance institutions’ corporate governance, there were fears about their survival. The text, which became enforceable in January 2020, provides that first-class microfinance institutions must constitute a network and establish themselves in cooperatives with a board of directors to carry out their activities. The provisions presented as a real threat to the survival of the Mc2s even prompted Cameroonian billionaire Paul Kammogne Fokam -the owner of Afriland First Bank- to withdraw his sponsorship. Nevertheless, it seems the mutuals have overcome the regulatory challenge and even want to spread their wings.