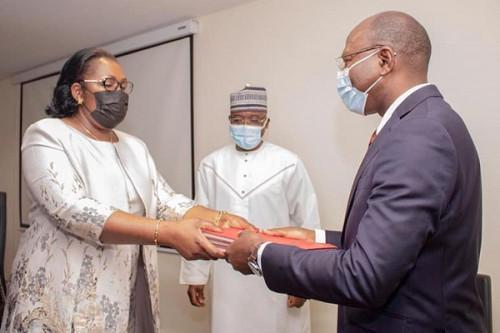 (Business in Cameroon) - Elected on December 4, 2020, as Secretary-General of the Inter-African Conference of Insurance Markets (CIMA), Cameroonian Blaise Abel Ezo'o Engolo officially took office on April 27, 2021. He was inaugurated by Gabon’s Minister of Economy Nicole Jeanine Lydie Roboty Mbou and Congo’s Minister of Finance Calixte Nganongo, who was representing the President of the of the CIMA Council of Insurance Ministers.

As the new secretary, Blaise Abel Ezo’o Engolo will have to address several challenges. "He will have to implement, with commitment and self-sacrifice, the tasks assigned to the general secretariat by the CIMA treaty," Nicole Jeanine Lydie Roboty Mbou says.

The reform also requires the companies under CIMA jurisdiction to have complementary equity equal to at least 80% of the social capital. To date, however, several companies are yet to fulfill that condition, which was mainly aimed at enhancing the financial soundness of insurance companies, reducing their risk of ruin probability, and consolidating the insurance sector.

Blaise Abel Ezo'o Engolo will also have to find ownerless properties and ensure transparency in the insurance sector since insurance companies manage public savings but don’t publish their accounting reports.

These are the challenges the new secretary-general will have to address by drawing on his experience in the insurance sector. Before his election as the secretary-general of CIMA, Blaise Abel Ezo'o Engolo was the Director of Insurance at Cameroon's Ministry of Finance. At CIMA, he is replacing his compatriot Issofa Ncharé who was elected in October 2015 for a five-year term.