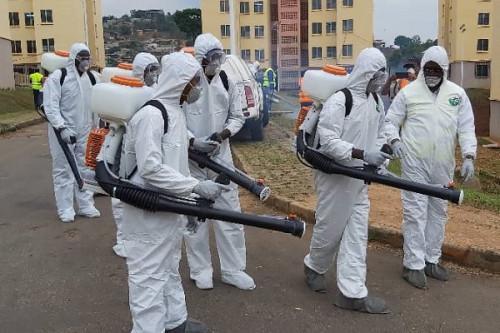 (Business in Cameroon) - So far, Cameroonian authorities have spent XAF8.8 billion (€13.5 million) in the fight against the Coronavirus. This was revealed by Elysée Eyenga, Head of administration and Finance for the operational unit in charge of this response, during a debate on CRTV, the state-owned television channel.

"Expenditures are not homogeneous and this should not be seen in terms of cost per patient. It indeed includes expenditures on people in confinement and those cared for in hospital facilities. However, there are also all the expenses for the purchase of protective equipment for medical personnel, the upgrading of technical platforms, and the financing for the decentralization of care in hospitals located in the other regions," he explained.

He also explained why the care can cost XAF250,000 (even three times more) in this instance. According to him, the few numbers of sick people admitted in the centre does not allow for economies of scale on disposable equipment. Also, there are the costs of food and the funeral process, in the event of death, as well as the investment for the acquisition of test kits, protective masks and all the equipment that allows for effective management of the pandemic such as the purchase of hospital beds and oxygenation equipment. Part of the expenditure was also made to acquire equipment that will help manage medium-term (less than three months) situations.

In a country where access to comprehensive health insurance is not widespread, the government had no choice but to pay the bill. In comparison, in the United States, Covid-19 patients are covered based on whether they are insured (an expensive service) or uninsured. According to CNBC, the federal government plans to borrow nearly $100 billion to reimburse hospital expenses not covered by insurance. However, the average cost of coverage varies from $13,500 (XAF8.16 million) to $40,216 (XAF24.3 million) per person.

In France, on which Cameroon's administrative governance model is modeled, the patients are covered by health insurance and possibly complementary health insurance. The amounts spent since the beginning of the epidemic are not known but should be far from the €13.5 million committed by Cameroon.

Let’s note that not all of the XAF8.8 billion already spent by the authorities have come directly from the public treasury. Nearly XAF1.6 billion is said to have come from companies and individuals who showed solidarity by handing checks directly to the Ministry of Public Health. In addition to this is the XAF500 million support from the Development Bank of the Central African States.