Yaoundé-Douala highway : Phase 1 expected to be delivered by December 31, 2020 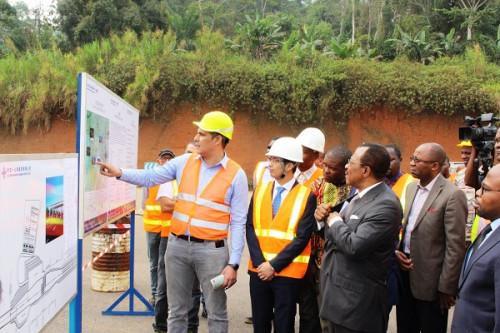 (Business in Cameroon) - As of January 30, 2020, phase 1 of the Yaoundé-Douala highway construction project was 80% complete. This was revealed by the Ministry of Public Works, which informed that works should be completed by December 31, 2020.

“The observed deployment of the China Highway Engineering Company from PK40 to PK60 in the framework of phase 1 of the highway augurs well for the delivery scheduled for this year. Of the 36 engineering structures to be built on this section, only 6 remain, this is an 80% completion rate. The completion rate for the excavation and backfill are 40% and 46% respectively,” the ministry explains.

Nevertheless, the ministry notes, the site is particularly difficult and uneven with extremely rocky and mountainous points which impose a consequent mobilization on all fronts. In that regard, the company mobilized 800 machines from PK 40 to PK 60.

The handover of basic social infrastructures will soon begin. It includes the construction of classrooms, boreholes and the distribution of medicines to improve the living conditions of the neighboring populations.

The Yaoundé-Douala highway is a modern road network of about 215 km between the country's two largest cities, Yaoundé and Douala namely. The estimated cost of the first phase varies between XAF284 billion and XAF337.84 billion depending on the source. During that phase, a highway of 2 x 2 lanes, extensible to 3, will be built over about 60 km, from kilometer point 0 to the Bibodi interchange.