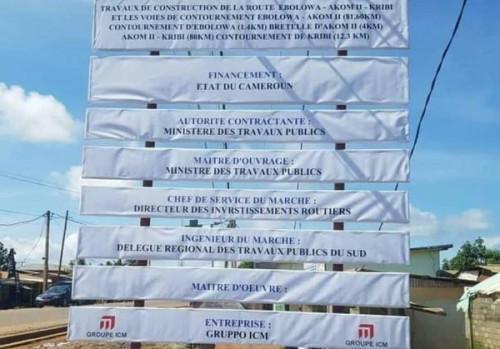 (Business in Cameroon) - Nearly two years after Cameroonian authorities awarded the contract for the construction of the Ebolowa-Akom II-Kribi road (179.28 km with bypasses) to Italian company ICM-CMC by mutual agreement, the project is still stalling.

In recent days, the state of the road has been the subject of protests organized by the population of the areas covered by the projected road.

During their protests, the population wondered why the road project was still stalling. According to credible sources, “construction works have not even started. The company [ICM-CMC] was only required to control the traffic. The road construction sign on the site was placed at the company’s initiative. It does not list all the elements of the project nor does it mention the reference of the contract. The construction contract has not been signed yet. Only the commercial contract is signed already (...) ICM-CMC lied about its financing capabilities. Unfortunately, it got caught up with its lies and tried to raise funds from Standard Chartered Bank with a London-based guarantor whose conditions are well above the allowed proportions (...) Consequently, other financing mechanisms are being explored.”

Those explanations confirm information published by Business in Cameroon in February 2019. At the time, we indicated that the financial partners (Standard Chartered Bank and the UK Export Finance) offered the funds at a 3.96% annual percentage rate, which was considered higher than the average interest rates obtained for such financings in Cameroon. The Ministry of Finance asked the financial partners to reduce that interest to 2.76% max.

The contract was awarded in the first quarter of 2019, after the President of the Republic Paul Biya’s visit to Italy from March 20 to 22, 2017. During his visit, Italian operators expressed their interest in various projects in Cameroon including the Ebolowa-Akom II-Kribi road, whose construction will help avoid the long U-turns because although Ebolowa and Kribi are both in the South, travelers have to go pass through the Centre (Yaoundé) and Littoral (Edea) just to reach those two towns.

The project is the materialization of a promise made by the Head of State to residents of the South on January 17, 2011, during the Ebolowa Agric Show. “To develop rural areas, the isolation of agriculture production zones needs to be addressed and important infrastructure projects implemented.  Therefore, I have decided to launch the construction of the following paved roads: Ebolowa-Kribi par Akom II…,” the president had said.  Since then, however, the roads have not been paved.

In its 2020 activity report, the Ministry of Public Works was scheduling the launch of the construction works for 2021.