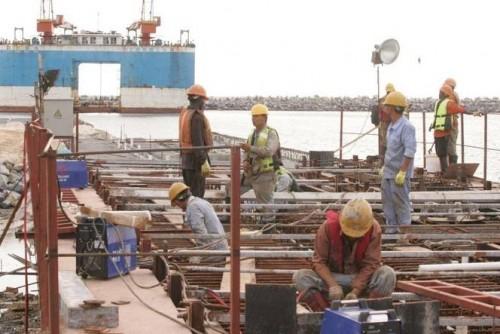 (Business in Cameroon) - Ongoing construction work for the multi-billion CFA francs Kribi Deep Seaport Project in Ocean Division of the South Region is reportedly over 70 per cent complete and stakeholders say the first phase will be operational by June 2014.

Reassuring members of the project’s steering committee after its 13th session in the sea-side resort town on Thursday October 10, 2013, officials of the contracting firm, China Harbour Engineering Company (CHEC), said work is progressing normally and all is being done to deliver by June 2014, the deadline given for the construction of the first phase of the port in Mboro, some 35 km from Kribi town.

According to Cameroon Tribune reports, the dyke is already 90, 73% constructed and the container terminal 79, 06% done. With the compensation of the affected population already revived, stakeholders said there is renewed commitment to give the project a significant boost.

When the Prime Minister, Head of Government, Philemon Yang, visited the project’s site on August 6, 2013, the project’s engineers assured that out of the 1,355 m core of water break, 1,323 m  was already executed, 80 per cent of back filing done, dynamic compacting of done at 40 per cent. The dredging of access channel and turning circle executed at 70.15 per cent.