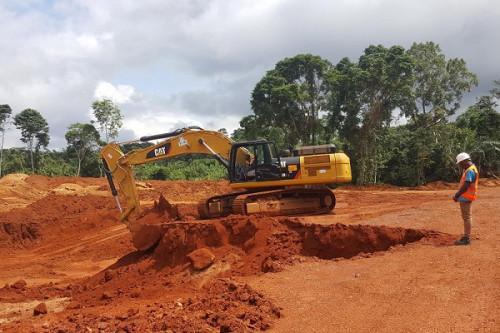 (Business in Cameroon) - The contract for the construction of the 96.7-km Ntui-Mankim road will finally be awarded to the Chinese firm China Rail Way 20. On July 5, 2021, Serge N’Guessan, the regional director for Central Africa for the AfDB - which is the main financial backer in this road project- notified Minister of Public Works Emmanuel Nganou Djoumessi of his non-objection to the choice of contractor.

Serge N’Guessan adds that the Minister of Public Works must also extend the deadlines. The Minister must also check, within a reasonable period, whether China Rail Way 20 has the required equipment for the works to be performed and has taken the necessary actions to bring the earth-moving equipment to the sites within the regulatory deadlines, which is 60 days after the reception of the work order. As for the proposed contractor, it should make sure its offers, including the guarantees submitted, are valid and follows the AfDB’s draft. The contractor must also change the project manager on lot 2A and the environment expert on lot 2B.

All the documentary proofs as well as the contracts signed by the Ministry of Public Works and China Rail Way 20 must be transmitted to the AfDB for its approval before the deals are finalized.

The Ntui-Mankim road is part of the Nationale nº 15 Batchenga-Ntui-Yoko-Lena-Tibati asphalting project. The works were initially entrusted to Portuguese firm Elevolution Engenharia (Elevo) but that contract was terminated on October 4, 2019.

A new process was launched to select a new contractor during which Sinohydro was selected. Its selection was however challenged and after three sessions of the arbitration commission of the Ministry of Public Contracts, Minister Ibrahim Talba Malla asked his peer at the Ministry of Public Works to convene a new meeting of the sub-commission in charge of bid reviews to analyze the submissions.

Instead, in a correspondence dated March 8, 2021, the Minister of Public Works notified the AfDB’s representative that the said public tender procedure was unsuccessful. After various negotiations, the AfDB decided to review the offers. That new review led to the selection of China Rail Way 20.