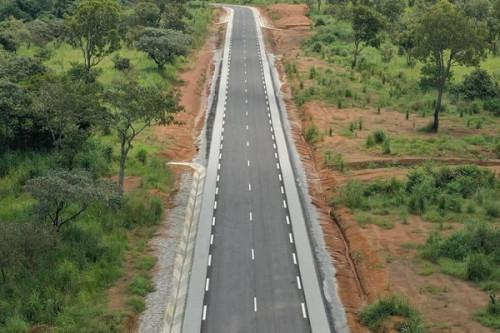 (Business in Cameroon) - Chinese company Sinohydro, winner of lot 4 for the construction of Batchenga-Ntui-Yoko-Lena-Tibati road, has delivered its Yoko-Lena (44.9 km) section as planned in the deadlines. This was revealed by the Cameroonian minister of public works.

According to the official, users are already able to easily circulate along the paved 44.9 km itinerary that connects Yoko to Lema in the central region. Specifically, Yoko-Lena is the first section of the Nationale N°15 to be completed.

The completed road is an R80 (reference speed of 80 km/h) and R60 (reference speed 60 km/h) category infrastructure. This means that depending on the track being crossed, the reference speeds should be either 80 km/h or 60 km/h. In the framework of that lot, a 2.5 km road has also been constructed in Yoko. This cross-section is a 10-meter platform that includes roadway of two 3.5-meter roads and two 1.5-meter roadsides at the rural bend area. As required, Sinohydro also placed empty tubes for optical fibres.

The lot 4 was funded (XAF19.61 billion) by the AfDB and Cameroon. Sinohydro was chosen to pave the 7-meter large road and build related infrastructures that will improve residents’ living conditions. The consortium Cira/Bec/la Routière was chosen to monitor the works on this lot as well as on lot 2 and 3 for XAF5.43 billion.