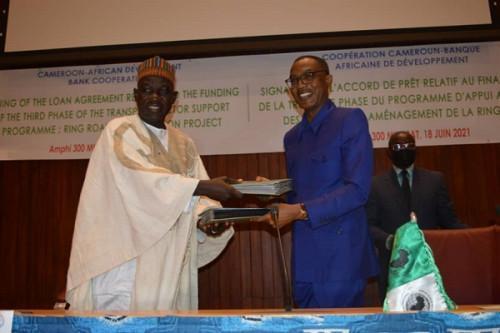 (Business in Cameroon) - On June 18, 2021, Cameroon signed a XAF106 billion loan agreement with the African Development Bank (AfDB) for the financing of the Ring Road, the third phase of the transport sector support program. The agreement was signed by Minister of Economy Alamine Ousmane, representing Cameroon, and Serge N’guessan, the AfDB’s director-general for the Central African Region.

This new loan raises the overall financing already provided by the AfDB in the framework of that project to XAF117.7 billion.

The agreement is being signed close to a year after it was authorized by Paul Biya, President of the Republic of Cameroon. On June 22, 2020, the president signed a decree authorizing the Minister of Economy to sign a €160.6 million (about XAF106 billion) loan agreement with the AfDB, on behalf of Cameroon. For the time being, there is no information on why it took so long to sign the agreement. But one thing is certain, the 12-month waiting time will surely contribute to an extension of the delivery deadline initially set for December 31, 2024.

It is all the more certain that the infrastructure will not be delivered within the initial deadlines, given that construction works are currently suspended because of the socio-political crisis ongoing in the Anglophone regions of Cameroon. On November 30, 2020, while defending the 2021 budget of the Ministry he oversees, Minister of Public Works (MINTP) Emmanuel Nganou Djoumessi revealed that the construction works were on hold due to “insecurity”.

The 365 km-Ring Road passes through five of the seven departments of the Northwest, which along with the Southwest forms the Anglophone part in turmoil since late 2016. It is a sort of ring connecting Bamenda, Bambui, Ndop, Babessi, Kumbo, Nkambe, Misaje, Nyos, Wum and Bafut. The Ring Road also comprises several connections to the Nigerian border, from Misaje notably.

For the AfDB, this road axis is a key section to boost commercial exchanges between Cameroon and Nigeria (a market with close to 200 million consumers) through the Bamenda-Enugu highway (also funded by the AfDB).

“This highway cannot be a real development and integration boosting instrument if it is not connected to a road network, whose base is the Ring Road,” said Ousmane Doré, then director-general of the AfDB for the Central African region.