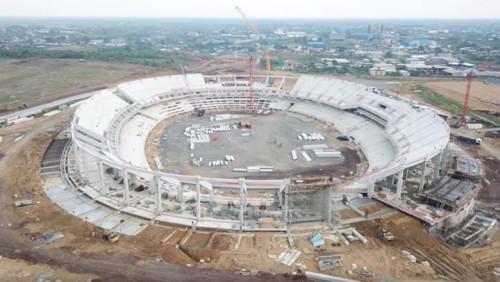 (Business in Cameroon) - Cameroon intends to inject CFA107 billion out of the CFA150 billion soon to be mobilized on the Douala Stock Exchange into infrastructures, in preparation for the 2019 AFCON. This equates to 70% of the amount, the government said in the operation’s information note.

In detail, CFA62 billion will be used to fund final works at the Olembe sports complex (a suburb in Yaoundé), its secondary stadiums and access roads will receive CFA36 billion; CFA26 billion for the Japoma complex (suburb of Douala), its secondary stadiums and access roads. As well, the Reunification Stadium in Douala will receive CFA8 billion for rehabilitation work.

This latest financing will benefit the company Prime Potomac, which is leading works on these four stadiums, and was recently accused by employees and other subcontractors for failure to pay wages and fulfil contracts, due to cash flow constraints.

In the Western region, where a brand new stadium has already been erected in the locality of Kouékong, CFA17 billion will be invested to build a secondary stadium and rehabilitate four other training stadiums in the cities of Mbouda, Bafoussam and Bandjoun.