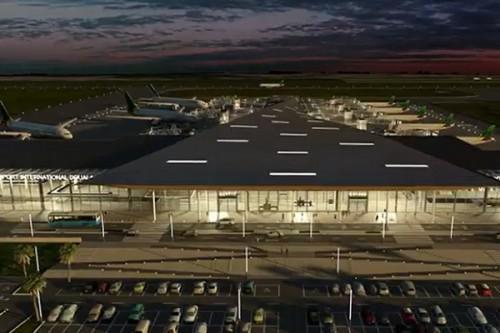 (Business in Cameroon) - Douala International airport plans to increase its yearly traffic capacity from 1.5 million passengers to 2.5 million. In the framework of the project, it recently published a graphic model showing the whole infrastructure.

The futuristic model shows a multi-storey infrastructure, VIP lounges, a mezzanine, a modern boarding hall, a boarding bridge with an escalator, and a duty-free space. For the time being, the dates of the launch and completion of the works have not yet been revealed and neither has the costs.

On February 5, 2018, the Airline Operators Committee (AOC) sent a letter to Thomas Owona Assoumou, the General Manager of Aéroports du Cameroun (ADC) - the public company in charge of the management of Cameroonian airports. In the letter, the AOC complained about the dilapidated state of the Douala airport.

Built between 1972 and 1977 by the French company GTE (Grand Travaux de l'Est), Douala airport was inaugurated by former President Ahmadou Ahidjo on 27 June 1977. Currently, this airport has a 2800-metre runway which was renovated three years ago by French company Razel.