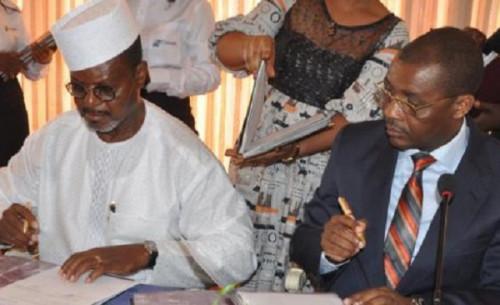 (Business in Cameroon) - On November 29, 2019, in Yaoundé, the Minister of Mines, Gabriel Dodo Ndoke (photo, with striped tie), signed an exploitation agreement with Codias S.A for the exploitation of the small Colomine gold mine (located in the Eastern region).

During the signing ceremony, Bonaventure Mvondo Assam (photo, in white chechia), promoter of Codias S.A, indicated that his company is a mining company under Cameroonian law. It holds, since January 5, 2017, a research permit called Colomine, valid for gold and related substances, covering an area of 309 km2 in the Ngoura district.

“The mining method envisaged for the extraction of Colomine's gold resource is underground mining by the pillar mining method and this exploitation is planned for 5 years, with a production peak of 500 kg of gold/year in the 2nd  year; the first year being devoted to the development phase (construction of the mine and other mining facilities),” the Ministry of Mines indicates.

According to this institution, the Colomine gold project will be the country's first industrial gold mine, thus guaranteeing the traceability of the ore mined and making Cameroon a gold-producing country known on the international mining scene.

Moreover, this project will allow the establishment of a mining value chain around gold. It will range from on-site extraction to the local processing of at least 15% of production, with the added value of creating gold smelting units (ingot production) and jewellery factories, thus strengthening the national industrial fabric.

On a social level, the government expects the creation of many direct and indirect jobs, which will help reverse the youth unemployment curve and fight poverty. Local small and medium-sized enterprises (SMEs) (subcontractors and other local suppliers) will also have the opportunity to deliver their goods and services. Another social advantage of this project is the capacity building of local staff, the transfer of skills and technologies to local workers coupled with the training of students from universities and institutions.