Almost all of Cameroon’s official diamond production is exported to The UAE and Belgium, BEAC data show 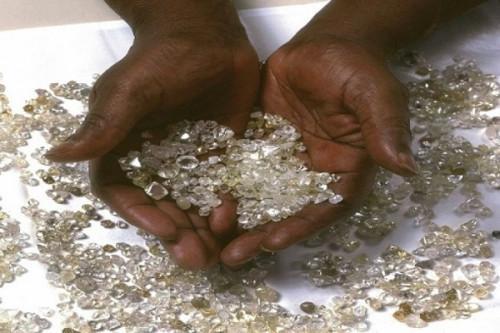 (Business in Cameroon) - Pending the commissioning of its mines, Cameroon’s share in the world diamond market is still insignificant. Most of the country's productions (over 96% in 2018, according to BEAC data) are exported to the United Arab Emirates (UAE) and Belgium, according to the Bank of Central African States (BEAC).

In a recent report on the world diamond market, the central bank of CEMAC states revealed that in 2018, Cameroon exported 55.31% of its production to the United Arab Emirates, 40.95% to Belgium, and 3.73% to Switzerland.

The significant portion of diamond exported by Cameroon to the UAE can be explained by the explosion of trade exchanges between Dubai and Cameroon in recent years. Indeed, Dubai - which is perhaps the most known UAE city and a sort of giant market for African countries - is one of the preferred destinations for Cameroonian traders. With the air transport agreement between the UAE and Cameroon, those exchanges, the diamond trade included, will surely rise further. Let’s note however that Cameroon’s diamond production is still light.

Hopes revived with the Mobilong deposit…

According to the Permanent National Secretariat of the Kimberly Process -an international control and tracing mechanism initiated to prevent these precious stones from being used as a means of financing the activities of warlords worldwide- Cameroon traced 2,438 carats of diamond produced on the national territory in 2020. Apart from that official production, a sizeable volume passes through informal channels to reach the international market. For instance, on November 11, 2020, the secretariat revealed that 1,028 carats of diamond destined to be smuggled from the country were seized in Cameroon.

Nevertheless, the country’s official diamond production will rise when the deposits identified on the national territory enter the production phase. Notably, there is the Mobilong deposit, in the Eastern region. Experts who carried out the initial exploration works on that deposit grade it as a world-class deposit. In the meantime, Cameroonian authorities announce that the potential of the deposit is being reassessed to finally reach an agreement on the real potential, which is subject to controversies since 2010 when the Korean firm C&K Mining revealed the findings of its exploration work stated in 2006.

C&K Mining was accused of overestimating the potential of the diamond deposit (at the time, it claimed the potential was 736 million carats or five times the global production) presented as the largest in the world.

It later truly appeared that C&K Mining did overestimate the potential to manipulate the stock market. Indeed, after the announcement, the C&K Mining share value rose 4.6 folds within 16 days on the Korea Stock Exchange. After a second exploration, the same company reevaluated the potential to 420 million carats, although the conglomeratic section of that deposit was not explored.

Let’s note that in late 2014, C&K Mining ceded its stakes on the Mobilong deposits to a Chinese investor, a certain Mr. Yang.