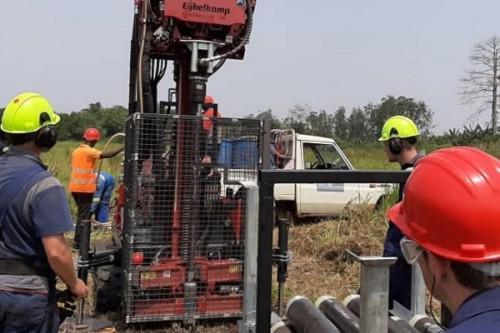 (Business in Cameroon) - The French industrial and mining group Erameth (that obtained a rutile exploration license in Cameroon in 2019) has begun the second phase of its exploration work on the Akonolinga rutile block, in the central region. This was notified by Fuh Calistus Gentry (Secretary of State to the Minister of Mines) during his visit to the block on January 7, 2021.

"We are very pleased to notice that the specifications are being met. The most interesting project in this 2nd phase is the pilot processing unit, which will give us an idea on how the ore should be exploited,” the official told the government daily Cameroon Tribune.

Let’s note that the exploration launched, in 2019, by Eramet on the Akonolinga block is expected to be completed after three (3) years, with the signing of an investment agreement. This agreement with the Cameroonian government will then pave the way for the industrial exploitation of the Akonolinga rutile, whose potential is currently estimated at 500,000 tons.

"Preliminary gradings are encouraging and we are sure that the first deposit is not only confirmed but that we will also find additional reserves,” said Fuh Calistus Gentry during his recent field trip to Akonolinga.

Officially, Cameroon's rutiliferous potential is close to 3 million tons, making the country the world's second-largest rutile reserve, behind Sierra Leone. Therefore, the exploitation of the Akonolinga rutile will make Cameroon one of the major players in the alloy metal and metallurgy market, whose raw materials are produced from rutile. Such a scenario will boost the contribution of the solid mining sector to the country's GDP. Indeed, according to officials, the contribution of the sector to GDP is currently below 1%.