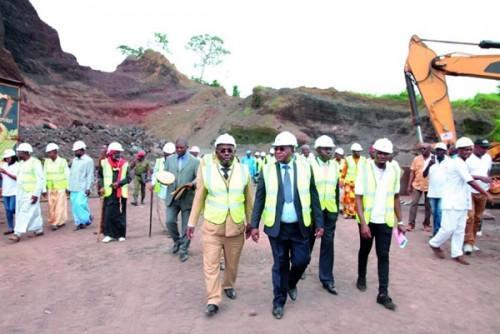 (Business in Cameroon) - Pozzolana mining company SETP (Société d’extraction et de transformation de pouzzolane) is currently clashing with the municipal authorities of Njombé-Penja, in the Littoral region of Cameroon, regarding the exploitation of an eight-hectare pozzolana quarry.

After several letters and a summon dated May 18, Paul Eric Kingué, mayor of the said locality, suspended Setp’s operations for 15 days for "illegal exploitation activities" of the quarry in question. Also, the mayor demanded "a monthly payment of between CFAF 3 and 5 million in the framework of a shared management agreement between the quarry operator and the municipality of Penja."

In reply, the company, in a correspondence dated May 28, indicates that its activities are "legal " and comply with Law No. 2016/017 of December 14, 2016, on the Mining Code. It points out that Article 71 of the code subjects the exploitation of quarry substances to "prior obtention of prospecting permit for new sites or an access authorization for old quarries,” as is the case here.

"Moreover, it is important to point out, a careful analysis of both the letter and of the Law N°2019/024 of December 24, 2019, on the General Code of Decentralized Territorial Communities shows that the exploitation of industrial quarries is not among the powers transferred to municipalities by the State of Cameroon," Setp’s management adds.

However, it explains, the company is bound to the commune of Penja by an agreement setting out the terms of payment of the transport tax at CFAF 1.3 million, payable monthly by the 5th of each month, the payment for the current month has already been made.

The company also indicates that every year, it dedicates CFAF 1 million to finance micro-projects for the benefit of disadvantaged groups. It also provides 100 shipments of 15 m3 of pozzolana each to the commune.