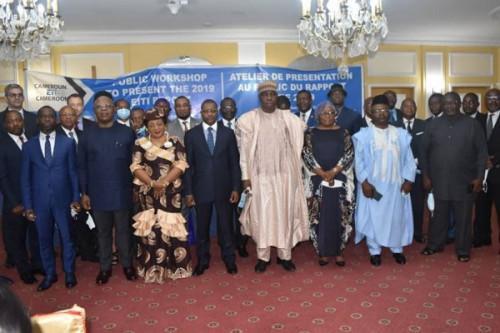 (Business in Cameroon) - In 2019, extractive companies paid XAF908.28 billion to the State and its institutions. This was revealed by the EITI committee in Cameroon’s 2019 Extractive Industries Transparency Initiative report presented on November 19, 2021, in Yaoundé.  This envelope is up by 18.9% compared with the XAF763.9 billion paid in 2018.

As usual, 90% of those revenues were contributed by oil exploitation, followed by natural gas and gold, the report stresses. The report adds that in 2019, the revenues contributed to the state budget was XAF703.9 billion, up by XAF135 billion compared to the XAF568.3 billion contributed in 2018.

Apart from the improvement in the amounts contributed, it is worth noting that the report has been published over a month before December 31, 2021, when the report was expected. Based on that fact, EITI experts claim the country lean its lessons from the recent suspension (on April 1, 2021) decided against it after it failed from publishing the 2018 EITI report.

The suspension was decided on April 1, 2021. It was lifted on July 23, 2021 (after the country published the report on June 30) reaffirming "Cameroon’s place in the prestigious club of countries that wish to improve their business climate by promoting transparency in the oil, gas and mining industries"(as Minister of Mines Dodo Ndoké, who is also vice president of the local EITI committee, put it).

From 2007 to date, thanks to the EITI, Cameroon has made significant progress in terms of transparency in the management of extractive resources. For example, in the framework of the EITI, National Hydrocarbons Corporation (SNH) has started disclosing the sovereignty and security it covers with oil and gas revenues at the government’s request.  For the EITI Board, those disclosures boost accountability in the use o oil revenues.