Mbalam ore: AutSino and Bestway get closer to taking over Sundance’s mining assets 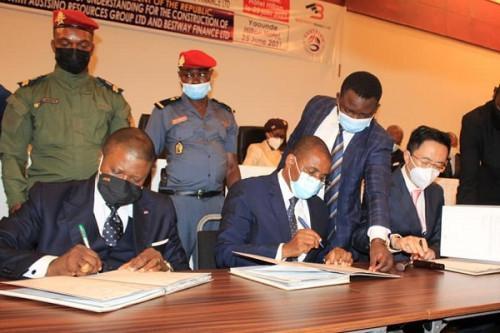 (Business in Cameroon) - Cameroon signed, on June 25, 2021, a memorandum of Understanding (MoU) with AustSino and Bestway Finance Ltd for the construction of over 500 kilometers of railway in the framework of the Mbalam iron ore development project. The contract binding the three parties is expected to be signed today February 25, 2022, in Yaoundé. According to an official statement released on February 24, 2022, by Cameroon’s Minister of Transport Jean Ernest Ngalle Bibéhé, the country will also sign the concession contract conceding the mineral terminal of the deep seaport of Kribi to the two partners.

The two agreements mean that AustSino and Bestway Finance Ltd will fund and construct a railway to transport the iron ore extracted from Mbalam (in Cameroon) and Nabeba (in Congo) to the deep seaport of Kribi and the mineral terminal of that port. In return, they will operate the terminal for a yet to be disclosed time before handing the infrastructure to the State of Cameroon since the terminal will be funded following a public-private partnership model.

By successively taking interests in the construction of the railway and the ore terminal, this consortium of Chinese firms (Bestway and AustSino) is quickly advancing in the plan to take over the mining assets of Australian firm Sundance in the Mbalam iron ore considered as one of the largest iron deposits in the world.

Taking those assets is the last step needed for this integrated mining project to pass into the hands of the Chinese consortium, after the failure of Sundance, a long-standing partner in that project, to effectively develop it.

In Congo, Sundance has already been dismissed from the project in favor of Sangha Mining, controlled by Bestway Finance. In Cameroon, although the last extension period for the Australian junior mining company's assets has expired, the government has not yet formally allocated those assets to a new operator. Foreseeing its withdrawal from the project in Cameroon, Sundance Resources initiated arbitration procedures against the State of Cameroon on June 2, 2021, as it did against the government of Congo.

In a company update published on November 23, 2021, Sundance Ressouces wrote: “ (…) Shortly after commencing these proceedings, Sundance and Cam Iron entered settlement discussions with the Government of Cameroon. To accommodate these discussions, it was agreed that the deadline for Cameroon to file its Answer to Sundance and Cam Iron's Request for Arbitration would be extended. The last of these agreed extensions is due to expire on 30 November 2021.”

Clearly, despite the arbitration proceedings, Sundance is hopeful an amicable settlement will be concluded with Cameroon,  which is preparing to transfer the Mabalam deposit to AustSino and Bestway Finance Ltd.

According to sources close to the case, the Chinese consortium has expressed its will to bear the cost of a possible conciliation between Sundance and the State of Cameroon. Such an arrangement could cost a similar amount to the US$8.76 billion (XAF4.7 trillion) of damages the Australian firm is claiming from Congo [Ed.note: the Mbalam-Nabeba iron project is estimated to cost XAF5.5 trillion].

It is not clear whether the Chinese consortium can afford such an amount, even if the claim was reduced by half since its track record (both in the financial and mining sectors) is not convincing.