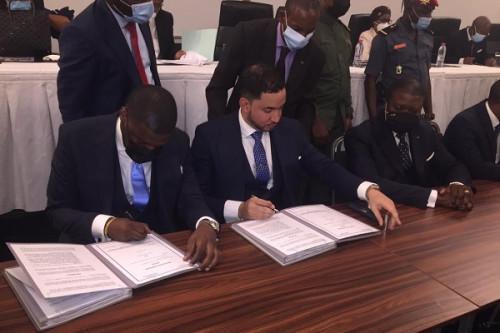 (Business in Cameroon) - Yesterday June 27, 2021, Australian junior mining company Sundance Resources issued a release expressing its "shock" concerning the June 25, 2021, Memorandum of Understanding signed by the government of Cameroon, AustSino, and Bestway Finance Ltd for the construction of the 510 km railway in the framework of the Mbalam-Nabeba iron ore exploitation project. In the release, Sundance, which has been unable to develop the project, implicitly accuses AustSino and Bestway Finance Ltd of deceit.

"We are shocked at these latest developments because an Australian company – AustSino – that we introduced into the Mbalam-Nabeba Iron Ore Project is attempting to benefit from the illegal expropriation of Sundance’s iron ore assets," commented Giulio Casello, Sundance CEO.

According to an analyst of the mining sector, this release issued by Sundance is like the pot calling the kettle black.  He explained that in terms of deceit, Sundance has proven to be the master, over the past 20 years, because it reaped dividends from the mining permits obtained from Congo and Cameroon without even developing the projects concerned by the permits.

Even though Sundance has become a master in the art of deception, are AustSino and its ally Bestway any different? Indeed, since June 25, 2021, when the MoU was signed, several people have been questioning their capacity to build the railway and subsequently develop the  Mbalam-Nabeba iron ore exploitation project, which also includes the construction of a mineral terminal at the deep seaport of Kribi. The questions mainly concern AustSino`s experience in the development of mining projects.

Indeed, on its website developed this year, obviously, AustSino mentions only one mining asset in Australia (Peak Hill Iron Project). Also, it was delisted from the Australian Stock exchange in December 2020. The unaudited financial accounts it published on September 30, 2020, only discuss the development of negotiations initiated in 2018 with Sundance Resources (Ed. Note Those negotiations were suspended on November 12, 2020) concerning the Mbalam-Nabeba project. Also, the expenditures reported by the mining company are similar to those of a startup. For instance, the company spent $ 177,000 (about XAF65 million)  on payments to various management personnel and related parties as well as $88,000 (close to XAF48 million) on exploration costs during the quarter ending September 30, 2020, the report informs.

Besides these odd expenditures that can make people wonder about the capacities of the company selected to participate in a project requiring close to XAF5,500 billion, there are also oddities related to the partner Bestway Finance Ltd. Indeed, the financial holding is based in Hong Kong and was established less than 12 months ago (it was established in June 2020). Just months after its establishment, the holding took over the assets of Congo Iron (a subsidiary of Sundance Resources) in the mining project through Sangha Mining Development Limited.

This scenario is similar to what happened in the case of Geovic, a Denver-based mining firm that has been nurturing hopes to develop nickel, cobalt, and manganese deposits in Nkamouna, Eastern Cameroon, since 2013. It also brings to memory the American firm Hydromine, which, in the early 2000s, promised to invest XAF5,000 billion on the Minim-Martap deposit in Northern Cameroon. Due to its inability to fulfill that promise, in July 2018, the Cameroonian government decided to cede its permit on the Minim-Martap deposit to Australian firm Canyon Resources.

After the disreputable performance of Sundance Resources on the Mbalam-Nabeba, is Cameroon about to witness another similar scenario with the AustSino-Bestway partners? Only time can tell.