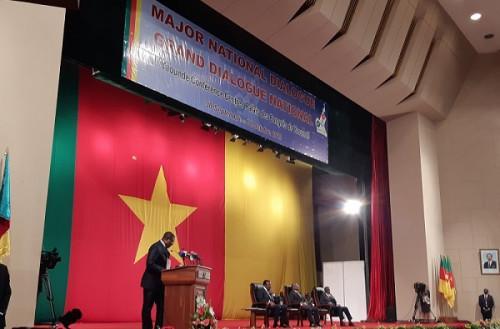 (Business in Cameroon) - In Cameroon, the national dialogue started today September 30, 2019, at the Yaoundé congress center. Called by President Paul Biya, this dialogue is aimed at finding solutions to the crisis in the two anglophone regions, ongoing for 3 years now.

Eight commissions have been created in the framework of the national meeting, whose works were opened by prime minister Joseph Dion Ngute. The first will discuss bilingualism, cultural diversity and social cohesion. The second commission will discuss the education system while the third commission will discuss the judicial system. The fourth and fifth commissions will respectively take care of matters related to decentralization and local development as well as the reconstruction and development of the regions affected by the crisis.

In 2016, a strike action initiated by lawyers and teachers became a pro-independent movement months later. This strike action was initiated to require that the peculiarities of the anglophone regions be taken into account in the management of public affairs in the country.

Since then, members of the defence force and pro-separatists have been fighting almost daily. This internal conflict has already claimed 2,000 lives and displaced hundreds of thousands of people. It also destroyed the regions’ economic fabric.

It is therefore hoped that the national dialogue, ending on October 4, 2019, will lead to crisis recovery.