Douala container terminal: A ruling from OHADA’s CCJA relaunches legal battles between Bolloré-Maersk and the PAD 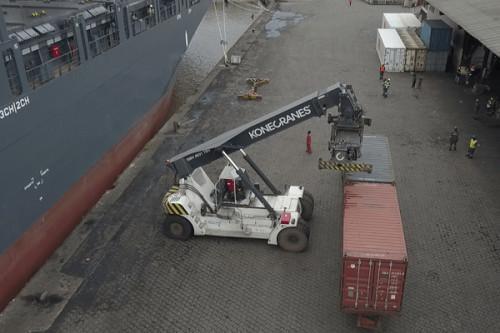 (Business in Cameroon) - On January 28, 2021, the Common Court of Justice and Arbitration (CCJA) of the Organization for the Harmonization of Business Law in Africa (OHADA) rendered its decision in the case (since 2019) between the Port Authority of Douala (PAD) and a consortium formed by Bolloré and APM Terminals, a subsidiary of the Maersk Group.

Indeed, on February 27, 2020, the PAD appealed against the order issued on December 31, 2019, by the Administrative Court of the Littoral to suspend the creation of a delegated authority for the management of the container terminal of the Port of Douala.

At the end of a hearing in the framework of that case, the CCJA rejected the appeal lodged by the PAD and condemned it to "pay the costs".

"The dispute in question follows a call for tenders issued by the PAD for the management of the container terminal at the Port of Douala and the subsequent creation of a delegated authority, for the management of the said terminal. Seized for the first time in this dispute (in whose framework various decisions were rendered by national and arbitration courts in favor of the Bolloré and Maersk groups) the Community court has just ruled, once again, in favor of the Bolloré and Maersk groups. In a ruling handed down on January 28, the CCJA rejected the appeal lodged by the PAD against the decision. As you can see then, the information circulating on social media stating that the CCJA rejected the Administrative Court of the Littoral’s ruling, in this case, is simply false," explained Atty Jacques Jonathan Nyemb, counsel for the Bolloré and Maersk groups, in an interview with Ecofin agency.

However, the attorney failed to mention that the CCJA rejected the objection raised by Bolloré and Maersk groups’ lawyers. Indeed, in a copy of the court decision, Assiehu A. Edmond (chief court clerk at the CCJA) indicates that for its defense, Bolloré-Maersk stated that the case was an administrative one rather than that of a commercial company and economic interest grouping law, for which the CCJA is competent. By retaining its jurisdiction in this case, the CCJA simply rejected the exception raised by the Bolloré and Maersk groups.

Following that ruling from the CCJA, the PAD is now pondering over the national jurisdiction competent to hear the dispute.

"Bolloré and Maersk wanted the CCJA to declare itself incompetent in this case so that the administrative court of the Littoral region’s decision can be deemed valid. However, by declaring itself competent, the CCJA indirectly reckons that the Board of Directors’s decisions creating the RTC (the delegated management authority) is commercial, not an administrative act. Consequently, the PAD will seize the high court (TGI)," says a PAD executive close to the case.

After the CCJA decision, "the administrative court of the Littoral region must declare itself incompetent, just as the administrative division of the Supreme Court, which no longer has the right to rule in this case," he added.

"The PAD first appealed to the Supreme Court of Cameroon and then to the CCJA. As this rejection from the CCJA is unappealable, the proceedings will now continue before Cameroonian courts. They will be the ones to rule not only on the suspension of the management arrangement but also on the legality of the latter based on the laws in force in the republic (...) The proceedings initiated will continue and the Bolloré and Maersk groups, reference shareholders of Douala International Terminal (DIT), will, of course, continue to defend their rights before national and international judicial bodies. In particular, they will contest the requisition of their staff and assets ordered by the PAD at the end of December 2019," said Jacques Jonathan Nyemb, counsel for the Bolloré and Maersk groups.

For the time being, the container terminal of the Port of Douala whose concession sparked the legal disputes since December 2019 is still managed by a delegated authority (RTC namely) set up by the PAD. Despite the Administrative court of the Littoral region’s ruling ordering the suspension of that management arrangement, the PAD claims RTC is necessary for the "continuity of public service".

Moreover, while it is preparing to initiate a new procedure before the High Court, the PAD has to deal with a new rising challenge. Officially declared the winner of the concession contract for the disputed container terminal, Swiss company Terminal Investment Ltd. is growing impatient as it is taking long for its contract to begin. The reason for this impatience is the legal battle between the PAD and Bolloré-Maersk (which claims the contract was awarded following a flawed tender procedure) and the delegated management whose mandate over the container terminal was extended to 2024.