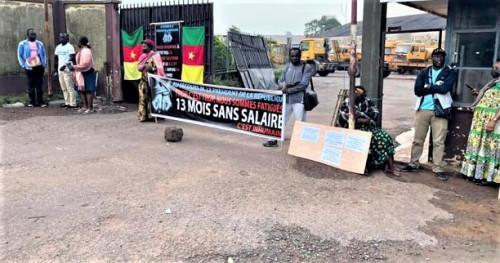 “(Business in Cameroon) - Help, Mr. President of the Republic! Enough is enough, we can’t take it anymore; 13 months without salaries is plain cruelty!” This is the message painted on a banner placed at the entrance of the headquarters of the National Park of Equipment of Civil Engineering (MATGENIE), in Yaoundé, since the morning of June 7, 2021.

According to an internal source, this is not a strike movement organized by staff representatives. Rather, it was organized by a group of employees. The source explains that the social tension is at its peak because the state-owned company is owing 13 months of salary arrears to its staff.

The group of employees protesting since the morning of June 7 have decided to ignore a release signed on May 28, 2021, by the staff representative after a meeting with MATGENIE’s general management.

“ (…) The general director invited us for a work meeting earlier today [May 28, 2021]. During the meeting, it became clear that the director’s promise to pay two months of salaries this month of May [2021] (…) was conditioned to the payment of some invoices for works carried out for the Ministry of Public Works. Although this promise is still relevant, its payment date will be slightly modified (…) So, the general director asks us to inform you that the first month of the promised salaries will be paid next week [week of June 7 to 13, 2021] and the second before June 15,” the release reads.

Indeed, due to the financial and management problems facing the company for about 20 years now, MATGENIE is obliged to rely on financial assistance to survive. Yet, according to the 2019 report on public corporations' performance published by the technical commission for the rehabilitation of public and para-public companies, the marketing strategy being implemented by MATGENIE since 2018 enabled it to constitute an important order portfolio. That portfolio includes road infrastructure maintenance contracts worth XAF15.7 billion with various administrations and private firms.

MATGENIE is also the sub-contractor and technical supervisor for civil engineering and studies works. However, due to its financial problem, it is unable to fulfill the contracts. In addition to its financial problems, the state-owned company is being affected by multi-year management conflict caused by the chairman of its executive board Jean Roland Daniel Ebo.

“The meeting with MATGENIE’s board members and management you presided on November 13, 2019, convinced us that the chairman of the administrative board’s will to obstruct the proper functioning of the company will not stop soon,” the board members wrote in a letter sent to the Minister of Public Works on November 18, 2019.

The board members listed several accusations against the chairman of the board. They accused the chairman of exclusively deciding when board meetings will be held and what to discuss. “The general management’s pressing and repeated demands, as well as the other board members' opinions, change nothing to his decisions,” they wrote. Also, they informed, the chairman of the board chooses the board members who will take part in meetings “so much so that board sessions are organized with members who have been replaced by the administrations that initially sent them (…) The board meetings are usually endless and almost unproductive because the chairman tries to impose his point of view on each of the points discussed. When he is not successful in doing so, he just moves onto the next point on the agenda without concluding the discussions on the previous point. He sometimes leaves the meeting room, abruptly ending the meetings without exhausting the points on the agenda just because he was outvoted on a given agenda item,” the letter continued.

The chairman also refuses to discuss with the remaining board members to clear the air. He also tends to involve himself in the day-to-day operations of the company without consulting the executive board. “ (…) To some point, he signed a decision canceling an order from the director-general and even wanted to impose an executive, namely the former Director of Financial Affairs (currently under a detention warrant) in whom the director-general lost confidence because of his actions." The board members also accused the chairman of having renewed the contract of the auditor without consulting the board.

Despite all these misdemeanors, the chairman of the board of MATGENIE wrote 178 denunciation letters he sent to various institutions between June 2017 and December 2018, the board members added. In the meantime, the staff is suffering. Yet, in 2015, the government decided to revive the operations of MATGENIE, which lost its market shares in the construction machines’ leasing market to private operators, by transforming into a full-fledged construction company. That way, it could submit offers for infrastructure construction contracts in the country, where large construction projects have been underway since 2012.

However, since that promising reform that led to the appointment of a new management team in 2017 (the team includes the chairman of the board now accused of sabotaging the operations of MATGENIE), the company is yet to thrive. This is due to the whims of some of its managers, and obstacles that hinder the implementation of a government project aimed at acquiring a thousand construction equipment for the company.