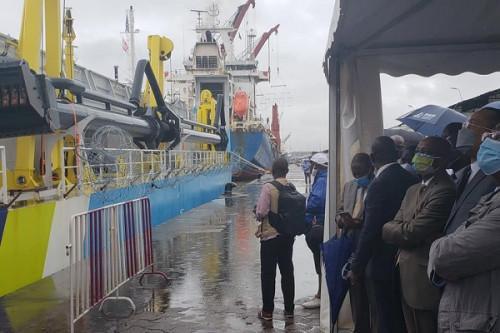 (Business in Cameroon) - The Port Authority of Douala (PAD) informs that the Easydredge 2700 it recently acquired from Dutch supplier IHC has been delivered at Post 10 of Douala-Bonabéri port.

This is not the first dredger the PAD is acquiring. Indeed, it previously received a Beaver 50, a stationary suction dredger for water bodies and dock feet. Also, it has ordered the trailing suction dredger TSHD 3000 from IHC.

This equipment will be used by the newly delegated management officially established on August 27, 2020. By creating a delegated body in charge of dredging, the port of Douala-Bonabéri aims to save about XAF10.46 billion every year.

Indeed, it explains, over the past five years, it spent an average of XAF17.16 billion on dredging costs every year. But, with the delegated body, it projects an average dredging expenditure of XAF6.7 billion yearly over the coming five years.