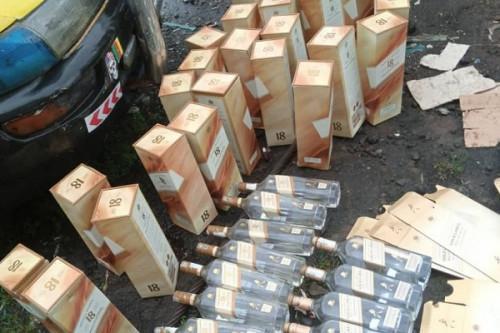 (Business in Cameroon) - On September 10, 2020, customs authorities published a communique informing that they have seized empty bottles and cardboards which were to be used in the manufacture of counterfeit whiskey in Mudeka, the South West region.

The images published with the communique show that the equipment seized were to be used to produce fake whiskeys of notable brands like Johny Walker and Black Label (12 and 18-year-old whose costs vary between XAF12,000 and XAF50,000).

This is not the first time a liquor counterfeiting network is being busted this year. In February for instance, fraud prevention unit BNCRF carried out a raid in Douala. During the raid, "Château Barreyres" wines of dubious origin were seized.

After investigation, it turned out that the seized wines were not from the real producer (Société BVS) who owns exclusive distribution rights on that brand in Cameroon. Therefore, the fraud prevention unit sealed the stores where the wines were seized.

During the raid, they also arrested a trafficker who was about to deliver counterfeit Chivas whiskeys (12 and 18 years old) and Jack Daniels to a snack bar.

According to the chamber of industry and commerce CCIMA, Cameroon loses about XAF255 billion every year to illicit trades, counterfeit products, and smuggling.